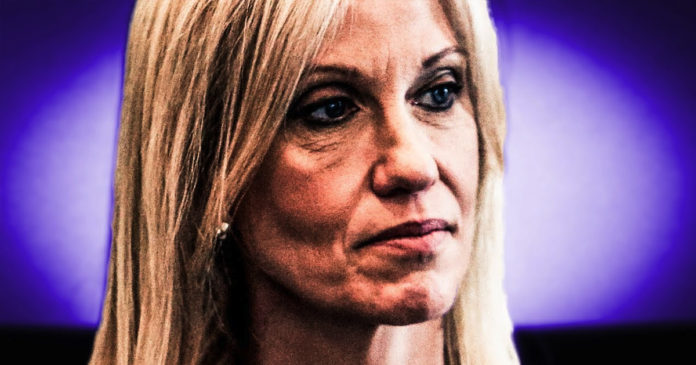 Kellyanne Conway (aka the queen of “alternative facts”) gets a thorough outing as a mean, nasty “viper” in a new tell-all book written by former Trump administration aide Cliff Sims, confirming what we’ve long suspected about her.

The book, entitled Team of Vipers, claims that Conway delights in backstabbing her colleagues by leaking negative information about them to reporters while simultaneously attacking those very same reporters for daring to write “fake news” stories about White House infighting:

“Kellyanne stood in a class of own in terms of her machinations – I had to admire her sheer gall.”

In their review of Team of Vipers, The Guardian notes:

“While none of this is exactly news, it places Conway in the realm of performance artists. Think Roger Stone, without the special counsel breathing down her neck, a Nixon tattoo on her back or an organic attachment to the president.”

Another White House staffer who is witheringly destroyed by Sims is former chief of staff John Kelly:

“Sims damns Kelly for an array of shortcomings including his lack of a total embrace of the president and his agenda, an interpersonal skills deficit, and his support for Rob Porter, the disgraced ex-White House staff secretary and alleged serial abuser. He also tags Kelly for a lack of self-awareness.”

Oddly, while Sims is somewhat critical of White House Press Secretary Sarah Sanders, he declares that she wasn’t a “natural liar”:

“Sarah Sanders, Trump’s press secretary, possessed a casual attitude toward truth-telling when it came to the press, according to the book. In Sims’ words, Sanders ‘didn’t press as hard as she could have for the rock-bottom truth,’ adding that her ‘gymnastics with the truth would tax even the nimblest of prevaricators, and Sanders was not that.'”

No wonder this administration manages to bungle everything they undertake. The executive branch is being run by selfish sycophants who are too busy cutting each other to shreds to actually get anything positive done on behalf of the American people.