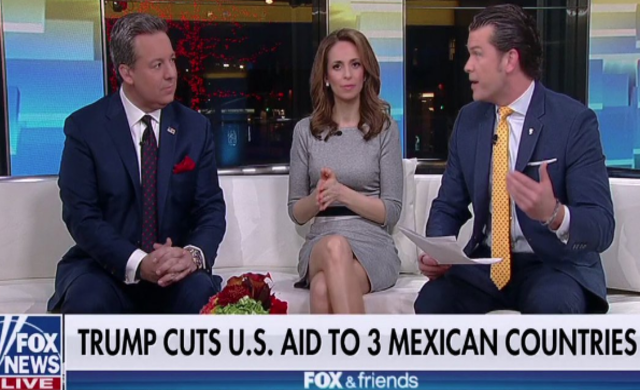 As we all know only too well, the good folks at Fox News aren’t exactly known for their factual accuracy, but something the network did Sunday morning during “Fox & Friends” took that to a new level of absurdity.

During a discussion of President Trump’s plan to cut aid to three Central American countries, a graphic was displayed on-screen that read:

As HuffPost reports, the Fox graphic was just a tad bit incorrect:

“El Salvador, Guatemala and Honduras are independent nations, located south of Mexico, a separate country that is not part of Central America. Trump has blamed those three countries for a recent influx of asylum-seekers to the U.S-Mexico border.

“Many of the migrants have sought asylum in the U.S. because of troubling conditions within their home countries for which the U.S. has provided relief. There are now concerns that cutting off financial aid could eliminate programs that have kept people from migrating northward.”

Not only that, but Mexico might take it as a personal affront if we cut off all aid to three of its other countries. Imagine the outrage!

Later in the broadcast, Fox did offer an apology for their faux pas, but it was far too late to forestall the Twitter dragging they so rightly received:

Can’t help but feel a little disappointed…it was great to spend Spring Break with my family, but we only got to see 1 of the 3 Mexican Nations. #betterlucknexttime pic.twitter.com/wLUJ6b9sqw

Quick, someone ask @FoxNews which continent Mexico is on. https://t.co/lTYfAJYaBI

Really unfair how Mexico gets to have 3+ teams at the World Cup.

That IS how they see us @FoxNews pic.twitter.com/le4StDkG4n