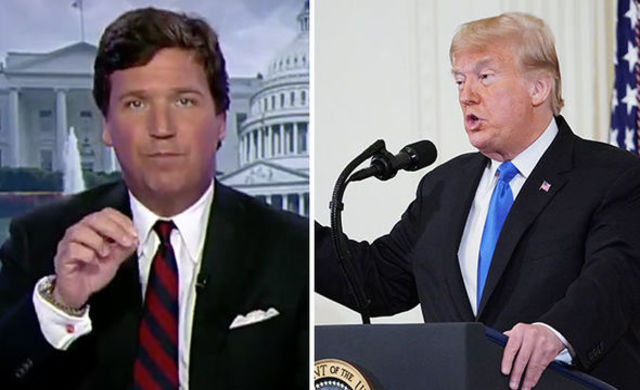 President Donald Trump loves to say he’s kept all of the campaign promises he made, but Fox News host Tucker Carlson — who is normally a staunch defender of the president — disagrees, telling a Swiss magazine that Trump has failed to keep his promises.

In the interview with Die Weltwoche, Carlson noted:

“His chief promises were that he would build the wall, de-fund planned parenthood, and repeal Obamacare, and he hasn’t done any of those things.”

Carlson added that Trump’s failure to deliver is his own fault:

“It’s mostly his fault that he hasn’t achieved those things. [H]e knows very little about the legislative process, hasn’t learned anything, hasn’t and surrounded himself with people that can get it done, hasn’t done all the things you need to do so.”

The Fox host also said he’s not sure Trump is capable of the focus needed to be successful as a leader:

And Carlson told the magazine that Trump’s constant bragging is also something he simply can’t stomach:

“I hate that about him. It’s not my culture. I didn’t grow up like that.”

The only thing Trump has accomplished legislatively in his first two years in office is the massive tax cut for the wealthiest Americans, which was supposed to stimulate the economy and lead to unprecedented economic growth. But the stock market is floundering, the trade deficit is skyrocketing, and most economists are warning that a major recession is right around the corner. While Trump may try to blame those events on others, his policies are to blame, and all the bragging in the world won’t change that fact.

Trump is facing bad news on every front and could well be on the verge of impeachment as soon as Special Counsel Robert Mueller releases his report on the 2016 election. And now the normally loyal acolytes at Fox are turning on him. Expect a Twitter meltdown very soon.