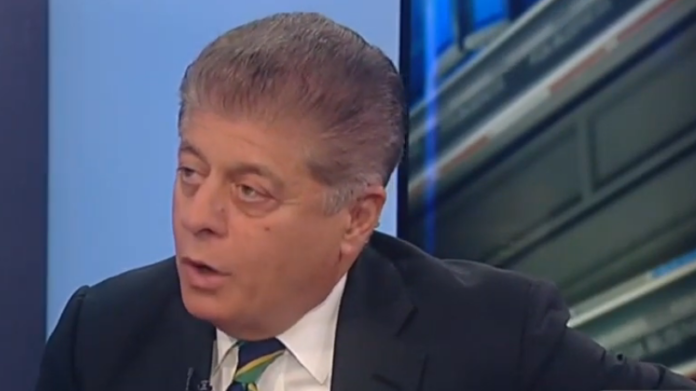 Fox News legal analyst Andrew Napolitano says the White House should indeed be worried by reports that President Donald Trump urged the president of Ukraine to investigate the son of former Vice President Joe Biden because that is clearly “an act of corruption” by the president.

“This is the most serious charge against the president, far more serious than what Bob Mueller dug or dragged up against him. If there was a quid pro quo — it does appear as though a quarter of a billion dollars in defensive weaponry was held back for a period of time while these… conversations were going on between the presidents.”

The reference to a quid pro quo, The Hill notes, involves allegations that Trump attempted to withhold U.S. military aide to Ukraine unless Ukrainian President Volodymyr Zelensky agreed to investigate Hunter Biden’s business dealings in the country. Trump finally released the money after members of Congress raised concerns over the delay.

When host David Asman tried to steer the interview to the Biden family, Napolitano refused to follow along, adding:

“If true, we haven’t seen the whistleblower complaint, and, under the law it has to be revealed — if true, this is an act of corruption.”

Napolitano was also asked about remarks Trump made to reporters Monday at the UN General Assembly. The president said he “did not make a statement that you have to do this or I’m not going to give you aid.” Trump continued:

“I wouldn’t do that. With that being said, what I want is I want — you know, we’re giving a lot of money away to Ukraine and other places. You want to see a country that’s going to be not corrupt.”

The Fox legal analyst wasn’t buying that, either, remarking:

“If you are the president of the United States and making a conversation that you know your intelligence community is listening to, of course you’re not going to articulate a quid pro quo. You’ll just make the quid pro quo happen.”

A quid pro quo would indeed be an act of corruption. It would also qualify as a high crime and misdemeanor. So if the allegation is proven to be true, there can only be one remedy according to the Constitution: Donald Trump must be impeached.