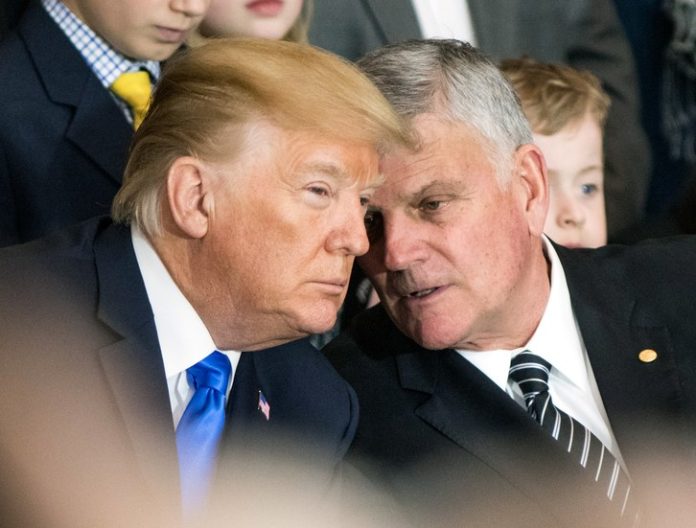 Noted evangelist and Donald Trump acolyte Franklin Graham is calling for national day of prayer so God will protect the president from “his enemies.”

Graham declared his day of prayer will be Sunday, June 2, in a posting he made on Facebook:

Be sure and note some of the incredibly ridiculous rhetoric Graham uses:

President Trump’s enemies continue to try everything to destroy him, his family, and the presidency. In the history of our country, no president has been attacked as he has. I believe the only hope for him, and this nation, is God.

No president has been attacked the way Trump has? Really? What about the fact that for eight years Trump himself repeatedly attacked his predecessor in office, Barack Obama? Trump did his best to try and make it appear Obama was unfit for office and suggest he wasn’t an American citizen.

This is a critical time for America. We’re on the edge of a precipice. Time is short. We need to pray for God to intervene. We need to ask God to protect, strengthen, encourage, and guide the President.

It’s been said before but it needs to be repeated: Donald Trump is the opposite of everything Jesus stands for. He’s greedy, boastful, corrupt, and a pathological liar. Praying for him would be the equivalent of setting a Bible alight in the Vatican and laughing.

Pray for Donald Trump? I’d just as soon pray for a mound of cow dung.