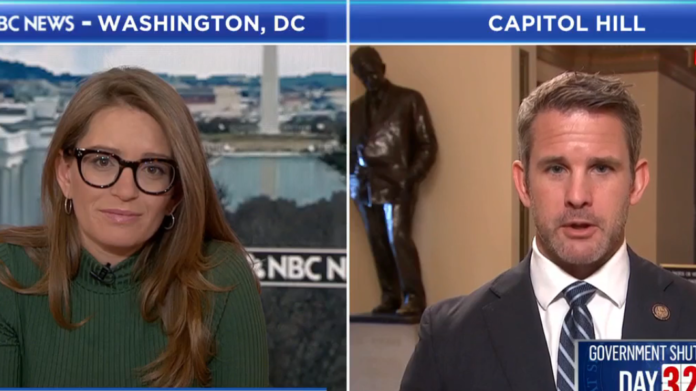 If perhaps you were wondering whether or not the disgusting views held by President Donald Trump about immigrants is shared by other members of the GOP, one Republican congressman made it clear Tuesday that they most certainly do.

Rep. Adam Kinzinger (R-IL) was a guest on MSNBC when host Katy Tur asked if perhaps one of the roadblocks to ending the government shutdown is that the rhetoric around immigration has become so “ugly.”

“I think we have to look at all immigrants as human beings made in God’s image. But that doesn’t mean we don’t have a right to defend our territory and our borders and set an immigration policy for legal immigration.”

“Consider the way the president of the United States talks about it. He calls them criminals and rapists and he says that everybody that comes across the border is going to try to hurt you or your family.”

Rather than admit that Trump is indeed fond of using derogatory language about immigrants, Kinzinger pivoted and said Speaker of the House Nancy Pelosi (D-CA) had called walls “immoral.”:

“I mean, we look at that and go, ‘How is a wall immoral?’ I mean, I have four walls around my house and they keep bad people out and critters out.

“So that’s the same idea. We’re just not talking to each other and using the right language to say, ‘We all mean well.’ Democrats mean well, Republicans mean well. Let’s just get our well-meaningness together and do something.”

Is comparing immigrants to “critters” the right language to use? Does it help the the situation to inflame things further with such a disgusting comparison?

Perhaps Congressman Kinzinger didn’t mean to be offensive and downright racist with his “critter remark,” but when dealing with Republicans in the Age of Trump, it’s hard to give them the benefit of the doubt.