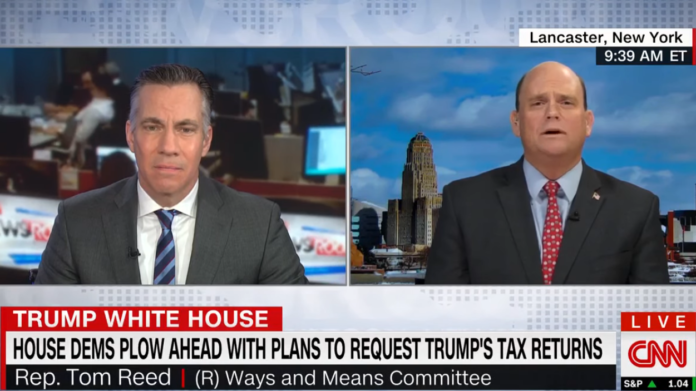 House Democrats say they are indeed about to request President Donald Trump’s tax returns, and that has some GOP members of Congress very worried and desperate to make bogus excuses for why no one has the right to see Trump’s tax forms.

During an appearance on CNN Friday morning, Rep. Tom Reed (R-NY), who serves on the Ways and Means Committee, told host Jim Sciutto that he and his colleagues on the committee have to “be careful we are not going down a slippery slope of picking for political purposes someone’s tax returns for a political process.”

But Sciutto wasn’t buying what Reed was trying to sell, reminding him:

“We are not talking about anyone. We are talking about the leader of the free world, the president of the largest economy of the world following what has been an established protocol for decades by republican and democratic presidents. Don’t you and I have the right to know whether our president pays taxes?”

“Well, this is just the slippery slope: Where do you draw the line, just the president?”

Once again, Sciutto had the perfect comeback to Reed:

“Yes! Draw the line at the president!”

But Reed continued to use ridiculous hypothetical arguments:

“If it’s OK for the president and no one else, the next chairman could say, ‘How about my political adversary, the guy down the street I’m having a neighborhood dispute with?'”

What Congressman Reed conveniently neglects to mention is that the issue of a president’s tax returns has never been more relevant than they are in the case of Donald Trump, a man who may have financial connections to Russia, Saudi Arabia, and other foreign countries that the American people have every right to know about.

Ever since he announced his run for the White House, Trump has steadfastly maintained that he cannot possibly release his taxes because he’s under audit. But he has never shared the IRS letter proving he’s being audited and a person under audit can legally share his or her returns with whoever they choose.

If Trump is as innocent as he repeatedly proclaims, why doesn’t he want us to see who he’s in bed with financially?