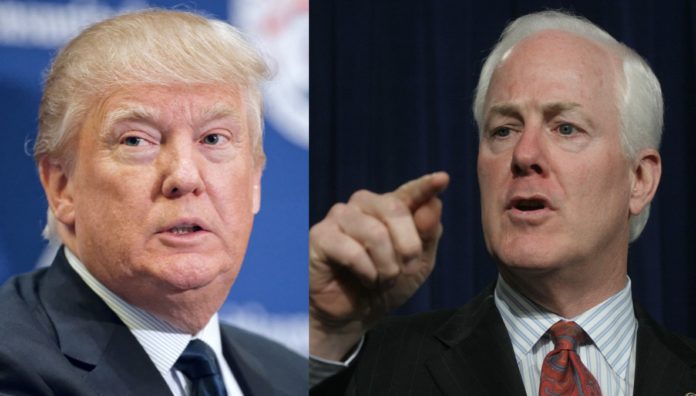 Texas Republican Senator John Cornyn is getting worried about his chances of being re-elected in 2020, and that’s making him cling to President Donald Trump like an infant holds tight to a blanket.

Problem is, that same poll shows that 54 percent of Americans disapprove of the president, suggesting that math isn’t Cornyn’s strong suit, not to mention that 43 percent won’t win a national election.

Also, a look at the poll shows that while 56 percent of those surveyed said they approve of Trump’s handling of the economy, only 42 percent are pleased with the job he’s doing on his signature issue of immigration. A mere 37 percent said they’re pleased with how Trump responds to corruption in government.

Most presidents are much higher than 43 percent at this point of their first term in office, and that fact led many on Twitter to humiliate Cornyn with some basics when it comes to numbers:

Three points is within the margin of error. 😂😂😂 His approval likely did not go up. Even if it did….are you bragging about 43%? 😂😂😂 That doesn’t win elections, buddy. Thankfully.

Talk about lowering the bar, geez.

On most measures, he is well below 50%. Still sticking with a sinking ship?

Only in Trump World is 43% considered a success. SAD!

I hope that when we hit the inevitable recession you’ll be sure to credit Trump on that as well.

43% approval and 54% disapproval. You didn’t read the poll, John. Genuflecting on demand to Trump is melting your brain.

By the way —Texas landowners are suing Trump’s phony emergency declaration. Are you voting against the power grab and with Texans? https://t.co/JEPX1hPYx6

Looks like an uphill climb to bottom for Donny.

Only in the upside-down world of GOP/Trumpian “logic” is 43 percent considered impressive. Makes you wonder what Cornyn will have to say if the number reaches 33 percent. He’ll probably want to have a ticker-tape parade.