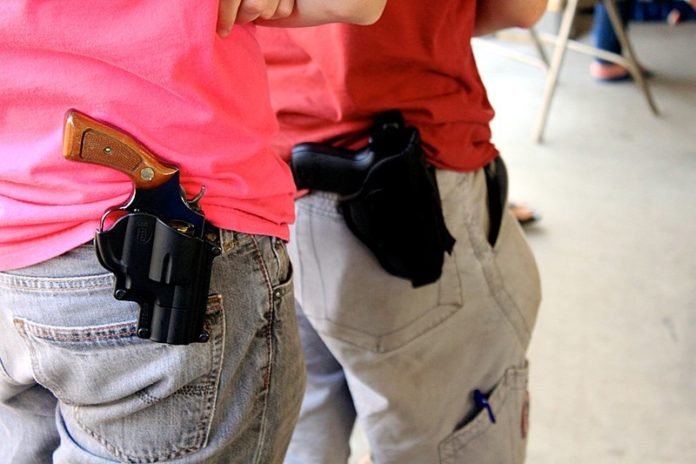 Texas was on track to becoming the next state to give citizens the right to carry firearms without a permit, but that all changed after an overzealous and impatient gun activist tried to ambush Republicans at their homes in an effort to pressure them.

GOP state Rep. Jonathan Stickland had even requested a committee hearing on House Bill 357, which the Democratic chair of the committee had planned to grant. But after a gun rights activist attempted to visit the homes of several Republican leaders, including the home of House Speaker Dennis Bonnen in order to lobby in support of the legislation, Stickland withdrew his request and declared the bill dead.

The activist, Chris McNutt, executive director of the nonprofit group Texas Gun Rights, was intercepted by officers with the Department of Public Safety when he attempted to visit Bonnen’s home.

Some gun rights activists even threatened the leaders on social media in order to force them to vote for it:

Other gun rights activists on Facebook urged Bonnen to advance Stickland’s bill, with some posting threatening messages such as “Drag ’Im Out … To The Nearest Tree.”

Police intervened and kept McNutt away from their homes, but his actions clearly spooked the lawmakers enough for them to put the bill on hold. Bonnen referred to McNutt as “gutless” and Democratic state Rep. Poncho Nevárez explained his decision to not hold a hearing.

“The behavior of certain groups and/or individuals who are unreasonable on their expectations and even more unreasonable in their behavior caused me to reconsider,” he said. “I have no hearing currently planned as a result.”

As for Stickland he denounced McNutt and other gun activists for threatening lawmakers and trying to ambush them at home.

“I’m saddened by the act of a few individuals that have stolen the conversation about legislation that I deeply care about,” he said. “There is a right way and a wrong way to influence the legislative process. It is never okay to target their homes or personal businesses when you know they are not in town.”

Stickland went on to say that the legislation will not be considered this session.