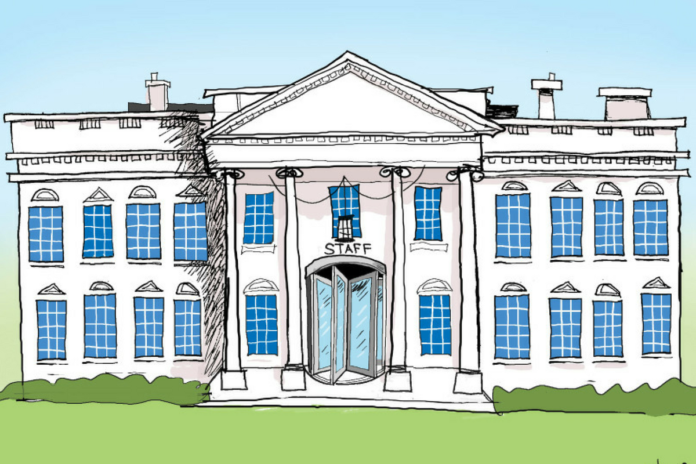 Since the resignation of Hope Hicks, President Trump’s campaign advisor and White House Communications Director, the White House has been mired in scandal and controversy. Hicks’s exit fits within a larger narrative of political chaos in the highest office, and a higher turnover rate than his predecessors.

The president, seemingly sensitive to rumors about internal turmoil, tweeted about the stability of his administration.

The new Fake News narrative is that there is CHAOS in the White House. Wrong! People will always come & go, and I want strong dialogue before making a final decision. I still have some people that I want to change (always seeking perfection). There is no Chaos, only great Energy!

According to a report by Politico, Hicks’ resignation has resulted in a “free-for-all” in the current administration, but some contenders have come to the forefront.

“The top candidates emerging from inside the White House, multiple officials said, are director of strategic communications Mercedes Schlapp, a veteran of the George W. Bush administration who has become a Kelly ally in his battle against Trump’s son-in-law, Jared Kushner; and Tony Sayegh, assistant secretary for public affairs at the Treasury Department.”

Both candidates have expressed interest in the job. However, it’s not clear who President Trump will choose to replace his trusted advisor, or if he will replace her at all. Worried observers have noted the president’s reticence to fill positions in his administration, relying instead on temps, some of whom are prohibited by federal law from working long term.

The revolving door of appointees, both at the White House and in other government sectors, has been cause for concern. For example, Secretary of the Interior Ryan Zinke proposed slashing budgets and cutting staff in the department by 4,000 jobs, and then was found to have ordered office doors totaling around $139,000.

President Trump also does not seem to fare well when compared with other presidents, most notably former president Barack Obama.

According to Politifact, the Trump administration has set records for turnover, from the 10-day serving Communications Director Anthony Scaramucci to Reince Priebus, the shortest serving White House Chief of Staff in history at 189 days. George Bush kept his Chief for 1,911 days.

Michael Flynn, Trump’s national security advisor, spent just 24 days on the job before admitting to lying to the vice president about illegal conversations with Russian operatives. President Obama kept his guy for over two years.

Turnover at the White House has also become a joke, referencing the chaotic nature of President Trump’s previous show, The Celebrity Apprentice. A hallmark of the show was pitting people against each other for prizes that turned out worse than the contestants thought, and it also appears to be a feature of his administration.