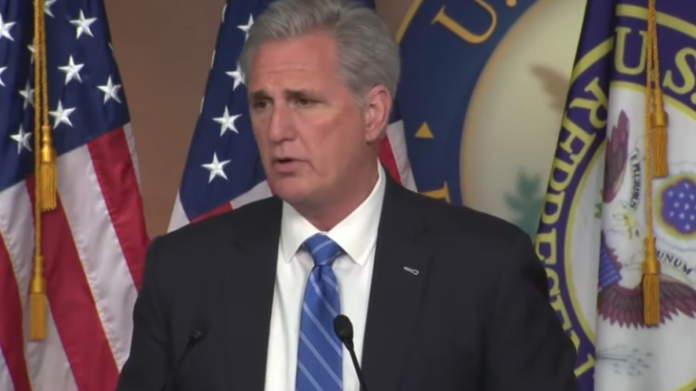 Now that multiple states — Alabama, Georgia, and Missouri — have passed restrictive legislation that says what women can do with their bodies and their reproductive health, Republicans in Congress are desperately trying to pretend they don’t agree with these bills, one of which mandates 99 years in prison for any doctor who performs an abortion.

Such was the case then House Minority Leader Kevin McCarthy (R-CA) spoke to reporters on Thursday, saying he was “pro-life,” but still believed there should be some exceptions:

“We assert the sanctity of human life and affirm that the unborn child has a fundamental right to life which cannot be infringed.”

That is the GOP platform on the issue of abortion. It clearly does not mention any of the exceptions that McCarthy listed. And as ShareBlue Media notes, the platform adopted by Republicans at their 2016 convention goes even further than the above paragraph:

In fact, the document also pushed for a so-called “human life” amendment to the Constitution, which would extend constitutional protections to fertilized eggs. This would not only undercut abortion rights, but could also outlaw in vitro fertilization (IVF) and many forms of birth control.

The Republican leader was also not telling the truth when he characterized abortion legislation that Republicans have supported in the House. In 2015, for instance, McCarthy’s party proposed an abortion ban that only made an exception for rape victims if they reported their attack to the police.

The bottom line could not be clearer: Republicans want to criminalize all abortions, no matter when they happen and no matter the extenuating circumstances that led to the woman becoming pregnant. In other words, if you’re a victim of rape, the GOP thinks you should have to give birth to that child.

No matter what he says or how he says it on the issue of choice, McCarthy is lying and he knows it. He thinks he can have it both ways and pretend he’s not an extremist like the state legislators in Alabama, Georgia, and Missouri. But he is, and all the lies in the world can’t hide that fact.