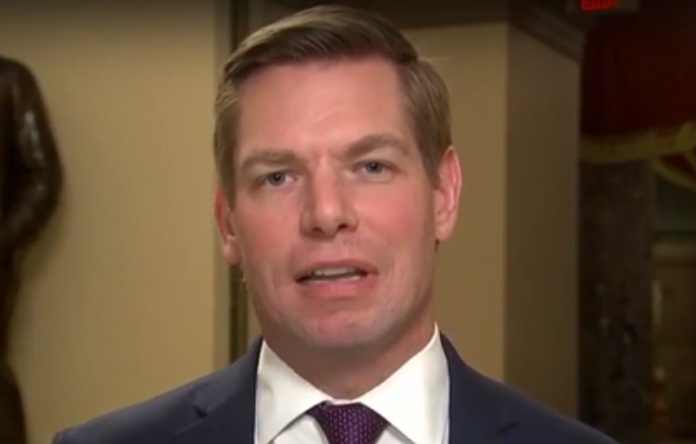 House Intelligence Committee member Rep. Eric Swalwell (D-Calif.) chimed in on President Donald Trump’s Russia scandal on Tuesday and made it clear that he doesn’t believe Trump is an unwitting Russian agent, but rather someone who “knows exactly what he’s doing.”

The revelation that the FBI suspected Trump of being a Russian agent rocked Washington DC and the nation over the weekend, and the fact that he got caught going to desperate lengths to keep his private talks with Russian dictator Vladimir Putin a secret even from his own senior staffers did nothing to dispel the suspicions. To top it off, Trump is seriously obsessed with withdrawing the United States from NATO, a move the would greatly benefit Putin while weakening our national security and the security of our allies in Europe.

That’s makes Trump’s private talks with Putin of even greater interest and supports the idea that Trump is a Russia agent, or at the very least an unwitting one.

But Swalwell thinks Trump’s ties to Russia are even more sinister.

During an interview with Chris Matthews on MSNBC, Swalwell expressed shock that a sitting United States president would have to actually defend themselves against claims that he is working for the Russians.

He is acting at every step like someone who wanted to work with the Russians and who’s betrayed our country and put them first every single time,” Swalwell began.

“It’s a stunning thing to hear the president of the United States defend himself, saying I’m not an agent of the Russians,” Matthews said.

“Yeah, and ‘I am not a crook,’ right? We’ve heard that before as well,” Swalwell replied.

“It took him two days” to actually deny he works for Russia, Swalwell continued. “Where I come from, when you act on behalf of the Russians, when you encourage them to hack after it’s revealed they’re hacking, when you take all the meetings they offer, when you meet with their leader in secret and then you take the notes from the one witness who has a record and acts to take away sanctions, pull us out of Syria — you are working for the Russians.”

“And I don’t even think it’s unwittingly,” he concluded. “I think he knows exactly what he’s doing.”