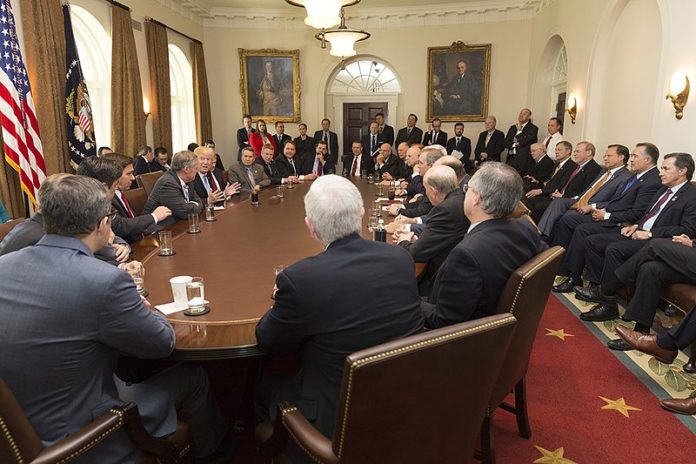 President Donald Trump and his extreme supporters in the House Freedom Caucus may be happy about causing a government shutdown, but not all House Republicans.

Trump’s obsession with building a vanity project to satisfy his massive ego got in the way of funding the government through early February on Thursday when Trump agreed with Freedom caucus member Rep. Jim Jordan (R-Ohio) and Rep. Mark Meadows (R-N.C.) to reject a bipartisan Senate bill in favor of a House bill that includes $5.7 billion for his border wall, a bill that won’t get through the Senate.

And that means we are on the brink of a certain government shutdown that could last weeks or longer as Trump throws endless temper tantrums because he isn’t getting his way.

As Democrats prepare to take over control of the House in January, House Freedom Caucus members are desperate to give Trump a win heading into 2019, especially since this is their last chance to be relevant, according to Rep. Carlos Curbelo (R-Fla.), who blasted the caucus for putting the government on the path to shut down when there was a perfectly good bipartisan bill on the table to pass.

“Until a centrist coalition emerges that puts the breaks on this car and turns it around, it’s only going to get worse,” Curbelo warned. “Unfortunately, some people around here put their career and their positions of power above the interests of the institution and the country. And until that changes, until we have statesmen and stateswomen, this will continue going on.”

“Our Freedom Caucus colleagues, they probably know that their relevance is going to be completely diminished next Congress, so this is kind of like a last gasp, but we know how this ends,” he concluded.

Indeed, it ends with the American people blaming Trump and Republicans for a government shutdown during the Christmas season when it’s going to hurt the most, especially since the Senate has already passed a bipartisan bill and many of them have already left the nation’s capital for the holidays.

Trump has spent his Friday morning trying to blame Democrats for the coming shutdown, but he is not only on tape telling Senator Chuck Schumer (D-N.Y.) that he would be “proud” to shut the government down while promising that he’ll take the blame for it.

And sources in the room with Trump and House Republicans during a meeting at the White House on Thursday have made it clear that Trump is giddy about a government shutdown.

“I’m OK with a shutdown,” Trump reportedly said. The sources also say Trump was “embracing it.”

“He was embracing it,” they said. “He was at peace with it. He was a kid in a candy store.”

Seriously. Trump is literally excited about a government shutdown. That makes him and the House Freedom Caucus members responsible for it because no one else wants a shutdown.

These conservative members of Congress, along with conservative media outlets wanted this shutdown and they demanded Trump pull the trigger to shoot America in the head because they weren’t getting their way. And he did it. American voters should remember this in 2020 when the White House and the Senate are up for grabs at election time. And Democrats should play Trump’s declaration to take the blame for a shutdown on a loop for the next two years and make it clear that Trump doesn’t care about the country. He only cares about what he wants and he’s willing to burn the country down if he doesn’t get it.