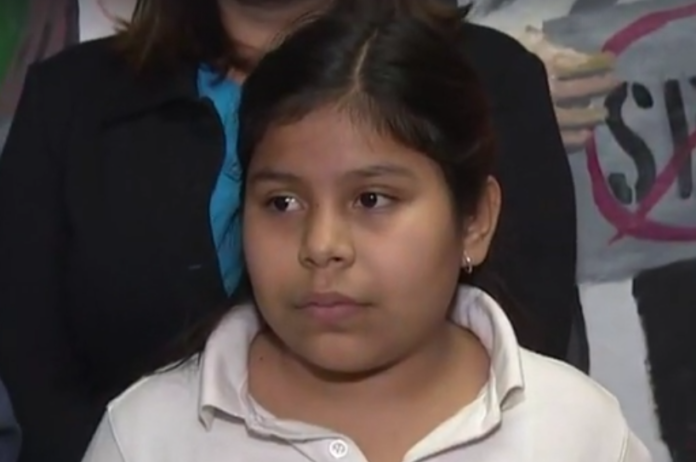 Deporting children is cruel, but deporting children without their families is even crueler, which is why Houston police chief Art Acevedo railed against the immigration judge who gave the order this week by comparing the judge to the Nazis.

Eleven-year-old Laura Elizabeth Maradiaga-Alvarado entered the United States through a legal port of entry on the southern border last year with her mother and older sister. The family fled violence and certain death in El Salvador by seeking asylum here.

But due to an apparent error, an immigration judge ordered the little girl to be deported back to El Salvador without her family, where she likely will not survive.

As a result, Laura is scared.

“I don’t want to leave my mom,” Laura said Thursday. “I want to stay with her.”

Her case is now being taken over by lawyers for free and a fundraiser has been started in an effort to keep the little girl in the United States with her family.

But perhaps no one is angrier about the removal order than Houston police chief Art Acevedo, who railed against the judge and federal law enforcement on Twitter as he referenced former President George H. W. Bush and the evangelical Christian community.

This is heart-wrenching. 1,000 points of light? Family values? Ameican values? Judeo-Christian values? If you’re a person of faith, speak out. WWJD?

Acevedo even went so far as to compare what the United States is doing to migrant families to what the Nazis did in Germany.

Yep. The Nazi’s enforced their laws as well. You don’t separate children from their families! Ever! You’d have to kill me to take my child from me simply because I was trying to get them to a better place for a better tomorrow. I am glad to be on the right side of history.

He then called for keeping families together and demanded lawmakers fix this problem.

Keep them together and if they don’t meet asylum requirements deport them as a family unit. We need comprehensive immigration reform but both major political parties have failed to address this problem because it gives tnem an issue to pander to their respective base.

Of course, President Donald Trump enacted the family separation policy just about a year ago, thus paving the way for decisions like the one affecting Laura today. If the policy were to keep families together, the judge would not be able to separate this family or any other family.

It’s heartless to deport a child by themselves back to a country where they can be killed or become the victim of human traffickers. This decision is morally wrong and should be immediately reversed. But, again, these kinds of orders would not happen if Trump were no longer in power. The Justice Department has drastically changed the way it deals with immigrants in recent years, from a compassionate system to an inhumane system. The buck stops with Trump and the only way to fix the problem is to ultimately remove him from office so a new president can reverse all the damage he has caused.