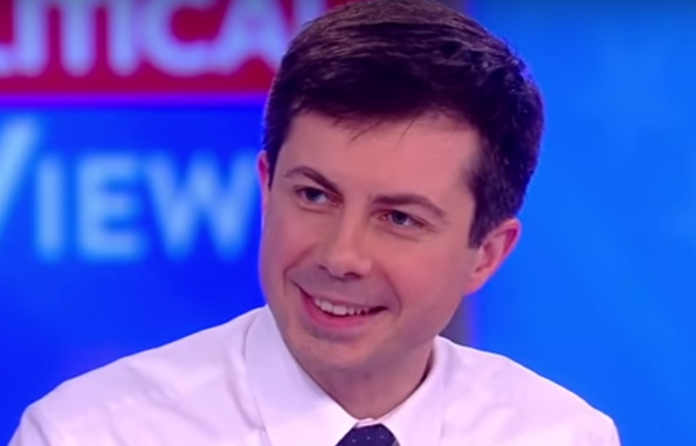 South Bend, Indiana Mayor Pete Buttigieg shot to third place in a new Iowa 2020 presidential election poll, giving his campaign one hell of a boost ahead of a primary season stacked with over a dozen Democratic contenders.

Buttigieg is a former Naval Intelligence officer who served in Afghanistan. He attended and graduated from Harvard and Oxford. He would also become the youngest person to ever win the presidency and the first openly gay president if elected.

And the fact that he comes from the Midwest, a region of the country Democrats have not performed well in for years, only makes him more appealing to the party.

President Donald Trump’s support mostly comes from the South and Midwest, but Buttigieg has a chance to make inroads in these states.

His polling had been dismal, but his multiple appearances on television have made him more recognizable, and his vision for the country has propelled him over many of his Democratic rivals in a new Emerson poll.

Former Vice President Joe Biden narrowly leads the Democratic field with 25%, followed by Vermont Senator Bernie Sanders at 24%. Mayor Pete Buttigieg of South Bend, Indiana has surged to 11%. Senator Kamala Harris of California follows with 10% – the only other candidate to clear double digits in Iowa.

“The biggest surprise in this poll is Mayor Pete, last week we saw him inching up in our national poll, and now he’s in double digits in Iowa, America is going to be asking who is ‘Mayor Pete’?” Emerson Poll Director Spencer Kimball said.

Biden has yet to actually declare his candidacy and Buttigieg is cutting into Sanders’ support among young voters. Sanders has 44 percent of that voting block compared to 22 percent for Buttigieg.

“If Buttigieg is able to maintain his momentum, his candidacy appears to be pulling from the same demographic of young voters as Sanders, and that could become a problem for Sanders,” Kimball noted.

It looks like Buttigieg could be the dark horse candidate who shocks the political world. And it’s not surprising considering his message, which he shared during a recent appearance on “The View”.

“An election is supposed to be about our whole country and we can’t just concentrate on those areas where people, for the most part, already agree with us,” he said last week. “If they have a somewhat different set of values, if they know what you have to say is coming from a place of values, I think you get a lot of credit for that.”

Democratic presidential candidate @PeteButtigieg: “An election is supposed to be about our whole country … we can’t just concentrate on those areas where people, for the most part, already agree with us.” https://t.co/f8u2wc159S pic.twitter.com/kUXfoXMMNO

Indeed, and this poll demonstrates that voters are giving Buttigieg lots of credit, and it helps that he supports fighting climate change and backs the Green New Deal. He also supports single-payer healthcare for all Americans and wants a fair economy that works for everyone.

Buttigieg is offering the Democratic Party a youthful choice who can put a dent in Trump’s stranglehold in Midwest states. It should be noted, however, that the poll shows Sanders and Biden as the two candidates who beat Trump while there is no such data for a Buttigieg versus Trump 2020 contest.

But as Buttigieg becomes more recognizable and more popular, that could soon change.