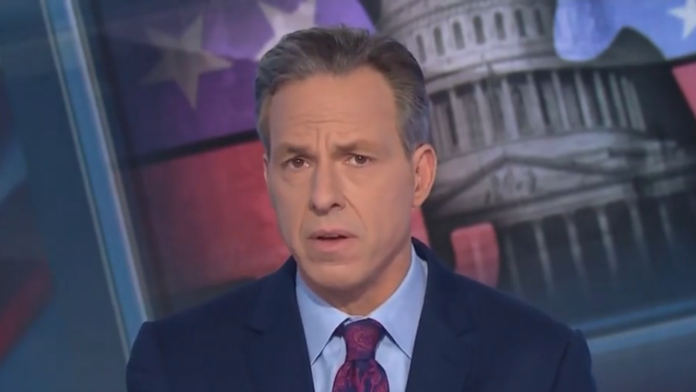 CNN host Jake Tapper used humor and President Donald Trump’s own words to expose the president’s blatant hypocrisy on the issue of anti-Semitism, which Trump accused Rep. Ilhan Omar (D-MN) of in response to a tweet she sent out earlier this week.

Tapper began by playing a clip of Trump telling a Jewish group in 2015:

“You’re not going to support me because I don’t want your money.”

Tapper pretended he wanted to see the controversial tweet posted by Omar, but instead a clip played that showed Trump saying there were “very fine people” among the neo-Nazis who marched in Charlottesville circa 2017. That led the CNN host to remark:

“Wait no, that’s not it either. Control room, I’m not looking for stuff about Trump, I’m looking for the Congresswoman Omar clip. Do you have it? Okay, I’m being told we have it. Thank you. Run it please.”

Instead, an image of a deleted tweet from House Minority Leader Kevin McCarthy (R-CA) appeared on the screen. In it, McCarthy accused financier George Soros and other American Jewish figures of trying to “BUY” the 2018 election.

Tapper ended the segment by looking into the camera, his voice dripping with sarcasm, as he told viewers:

“We seem to have some issues here sorting out which anti-Semitic tropes are offensive and which are not.”

Donald Trump and Republicans are in no position to accuse anyone of racism, anti-Semitism, or hate speech. After all, Trump himself has also said:

Trump has proven time and time again that he’s a racist who hates anyone different from him. And Jake Tapper masterfully called the president out for the bigoted hypocrite he is.