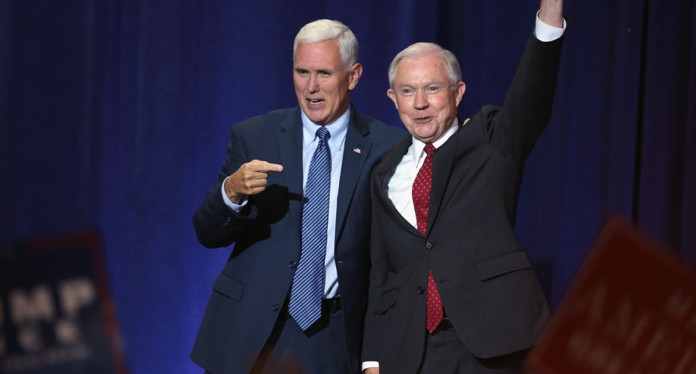 Glory be! Attorney General Jefferson Beauregard Sessions III is about to come before the House Judiciary Committee on Tuesday to answer, once more, for his changing goalpost on precisely what Russians he knew about personally or who interacted with the extremely Russia-friendly Trump campaign. When Senator Al Franken grilled him for the second time before the Senate Judiciary Committee in mid-October, Sessions seriously looked like he was ready to self-implode with simultaneous guilt and indignation, but this time, there is waaaay more evidence he lied by omission under oath. There was already ample evidence before!

In his second appearance before Franken, Sessions claimed he did not conduct improper discussions with Russia “at any time regarding a campaign or any other item facing this country.” Notice he didn’t mention if he had discussions, just that they weren’t improper – by his own definition of what that could mean.

Before that in February, from The New York Times:

“Trump said unequivocally that he knew of nobody from his campaign who was in contact with Russians during the election. Attorney General Jeff Sessions has told the Senate the same thing.”

Now, he’ll be back to answer for the new and very incriminating evidence presented by Trump’s former foreign policy advisor, George Papadopoulos, who pleaded guilty of lying to FBI investigators about his involvement with Russia. But he’ll also have to answer for new evidence from another former policy advisor, Carter Page, and that evidence is equally as damning.

Papadopoulos revealed that both Sessions and Donald Trump attended a meeting in which he suggested Trump meet directly with Putin in Russia. Although Sessions reportedly thought that was a bad idea, he later denied that the trump campaign had Russian official contacts. He must have conveniently forgotten about Papadopoulos’ idea of a meeting –directly with Putin, right? Right…Not believable for one second!

But that’s not all. Carter Page, the Trump campaigns most loose-lipped and seemingly oblivious Russian stooge, just confirmed to the House intelligence committee that Sessions was also informed of Page’s trip to Moscow, where he was found to have met with government officials, though he had just denied it on national TV. Yep! Sessions knew all along about this as well.

Things are probably not looking good for Sessions’ future as Attorney General, and the Democrats on the House Judiciary Committee have a lineup of other equally problematic topics to question him on, according to Politico.

Topics that will likely come up;

Meanwhile, Al Franken may have a chance to put Sessions in the hot seat one more time about his involvement with Trump and the firing of FBI Director Comey. Sessions refused to answer on that subject last time. Franken’s Senate Judiciary Committee is being prompted by Democrats to make Sessions squirm again, but will Sessions resign before that happens? If so, will Trump appoint someone to head the Justice Department that he can control even more and who won’t be recused from the Russian probe?

Things are only going to get more intense from here…