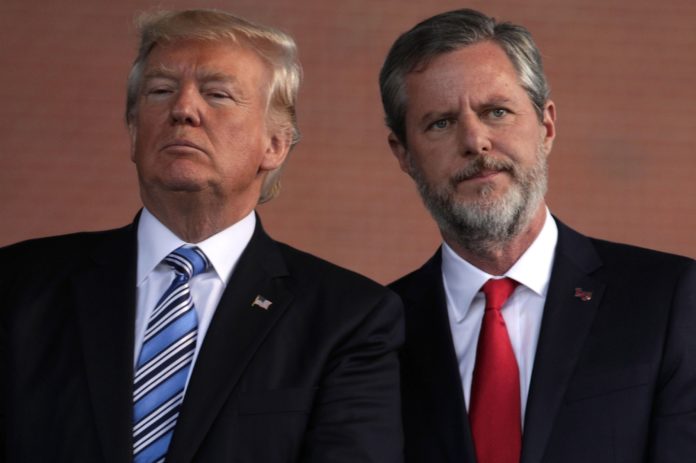 Liberty University president Jerry Falwell Jr. attempted to rewrite the history of the 2016 Election on Sunday by lying about former Secretary of State Hillary Clinton. And Twitter users were having none of it.

Falwell is an unrepentant supporter of President Donald Trump, so of course he decided to repeat Trump’s claim that Hillary is the one who colluded with Russia in 2016.

.@HillaryClinton colluded with Russia to buy a phony dossier to influence the outcome of a presidential election BUT, if USA hadn’t colluded with Russia, we would’ve lost WWII in Europe or would’ve had to use atomic weapons there. That’s how HRC justified her actions, I suppose?

The problem is that the Steele dossier started as a Republican opposition research project paid for by a conservative publication. Only after the publication abandoned the research did the Clinton campaign start picking up the tab. By then, the research had already been in full swing and did not break any laws.

Falwell, who has already been destroyed for supporting Trump’s treatment of migrant children, found himself being taken to the woodshed again for trying to rewrite history.

I am all about freedom of speech; but it also means I get to call you a traitorous stooge for repeating false propaganda for purely political purposes — nothing about this Tweet advances God’s work on earth.

You, sir are creating more atheists than Stalin did.

Bearing false witness is a sin, my man.

I think you have completely lost the plot…but then maybe pool boy is in your head a lot more than he ought to be? Just saying- this tweet is complete and utter rubbish

Enough about this. Tell us about the pool boy and your wife. ?

Jesus wept … and then he gave you a F Minus in History & Reading. https://t.co/WQaN30GGzk

That’s the most incoherent tweet I’ve seen today. And mind you, I’ve seen some really stupid ones. HRC is sitting back, drinking an adult beverage, and obviously renting a penthouse in your otherwise empty head. https://t.co/hjdrGiUxji

.@JerryFalwellJr know as much about foreign policy as he does about Jesus. What a pathetic excuse for a human being. https://t.co/j5o3qSfHyU

Special Counsel Robert Mueller may not have found a smoking gun to prove Trump colluded with Russia, but Trump didn’t try to stop Russia from helping him either and directly benefited from their interference. And no matter how many times Trump and his cronies try to spin it, that’s an asterisk that makes him an illegitimate president.