The United States Blues
Home Politics Congress Jerry Nadler warns: We are now in a constitutional crisis because Trump... 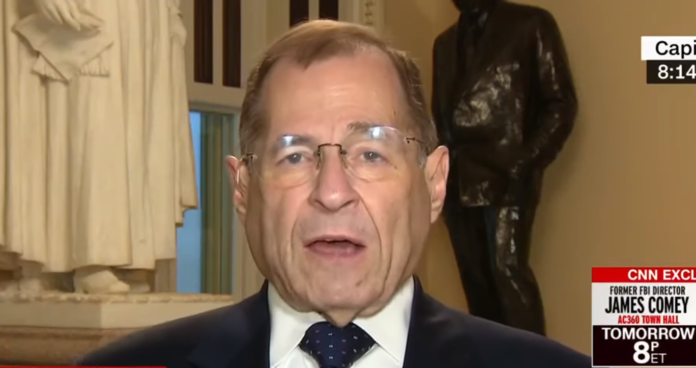 Rep. Jerry Nadler (D-NY), the chairman of the House Judiciary Committee, said Wednesday morning that the United States is now in a “constitutional crisis” because President Donald Trump is refusing to give Congress information they need to perform their oversight duties.

“We are in one because the President is disobeying the law, is refusing all information to Congress.”

Nadler also said that his committee will proceed with a vote on a contempt citation against Attorney General William Barr, who is refusing to release an unredacted copy of the report from Special Counsel Robert Mueller, along with the underlying evidence obtained by Mueller’s team during their two-year investigation of the 2016 election

The special counsel was tentatively set to testify before the House Judiciary Committee on May 15, but Nadler admitted he’s much less certain that will happen now that the president has said Mueller should not be allowed to do so:

“Now that the President has said what he said, I’m less confident than I was.”

CNN also reports that many Democrats in Congress are sick and tired of Trump’s refusal to cooperate with ongoing investigations, even though the law clearly states he should and must do so:

The decision to hold Barr in contempt signifies the anger simmering from Democrats over what they see as across-the-board stonewalling of their oversight of the Trump administration. They have had subpoenas blocked by the administration, witnesses decline to testify, lawsuits filed by the President to block their subpoenas and earlier this week the Treasury Department rejected a request for the President’s tax returns.

The New York Times published a story Tuesday highlighting records related to ten years worth of Trump’s tax returns which showed that from the years 1985 to 1994, Trump and the Trump Organization lost in excess of $1.2 billion.