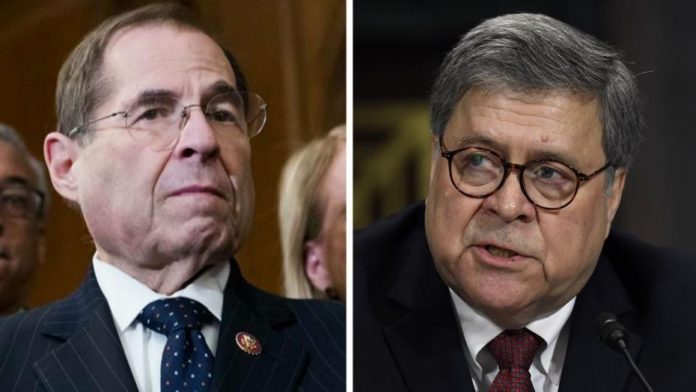 The House Judiciary Committee will consider a contempt of Congress citation against Attorney General William Barr and take a vote on that measure on Wednesday, according to Chairman Jerry Nadler (D-NY), who said the measure is in response to Barr’s refusal to hand over an unredacated copy of the report compiled by Special Counsel Robert Mueller, along with all supporting evidence gathered by Mueller’s team of prosecutors.

Nadler said Monday in a statement:

“The attorney general’s failure to comply with our subpoena, after extensive accommodation efforts, leaves us no choice but to initiate contempt proceedings in order to enforce the subpoena and access the full, unredacted report.”

As Politico notes, the move by the judiciary committee also comes as a response to Mueller’s report is formulated by congressional committees with oversight of the White House:

“The committee launched its own obstruction of justice investigation against the president earlier this year. The contempt citation explicitly mentions that probe, which is also centered on allegations of ‘public corruption and other abuses of power’ by the president. Nadler said he would put the contempt proceedings on hold if the Justice Department engages in a ‘good-faith’ effort to give Democrats access to the requested information.

“‘Attorney General Barr failed to comply with the committee’s request for these documents and thereby has hindered the committee’s constitutional, oversight, and legislative functions,’ the citation states.”

Additionally, the contempt citation against Barr also references the Department of Justice policy against indicting a sitting president and that Mueller accepted that statute and therefore didn’t charge Trump with obstruction of justice.

Congress, however, has every right to charge Trump with obstruction and can take actions that range from a formal vote of censure to opening impeachment hearings to determine if the president should be removed from office. The citation from Nadler’s committee also mentions this possible outcome:

“Congress is therefore the only body able to hold the president to account for improper conduct in our tripartite system, and urgently requires the subpoenaed material to determine whether and how to proceed with its constitutional duty to provide checks and balances on the president and executive branch. Otherwise, the president remains insulated from legal consequences and sits above the law.”

But a contempt citation would be mostly symbolic, Politico reports:

“Republicans held Barack Obama’s attorney general, Eric Holder, in contempt of Congress for failing to turn over documents. Some Democrats have floated the possibility of using punitive enforcement mechanisms against Barr for defying their subpoena, including levying fines against the attorney general.”