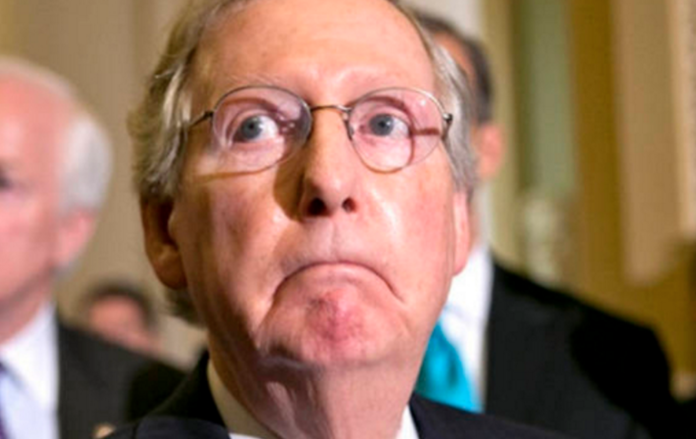 On Thursday, one day after former Special Counsel Robert Mueller testified that Russia was planning to interfere in the 2020 election, Senate Majority Leader Mitch McConnell (R-KY) blocked two pieces of legislation aimed at securing American elections, claiming the legislation would give Democrats a “political benefit.”

“Robert Mueller testified that not only did Russia try to interfere with our 2016 election and not only did Donald Trump’s — all of his intelligence community and Kirstjen Nielsen, when she was at Homeland Security, said Russia undermined American democracy in 2016. We remember back then the warnings came, but ‘Moscow Mitch,’ that being Mitch McConnell, of Moscow, Kentucky, actually blocked that and said he threatened the people that were going to try to get that information out to warn Americans.”

Instead, Scarborough noted, McConnell asserted that election interference is nothing more than a “hoax.” He added:

“‘Moscow Mitch’ says it’s a hoax. You have his own Intelligence Committee in the Senate led by Republican Richard Burr saying that Russia tried to infiltrate all 50 states back in 2016 and are going to try it again. ‘Moscow Mitch’ calls it a hoax. You have the Republican Trump appointed FBI director saying that the Russians infiltrated America’s democracy and are going to try again.”

All of this, Scarborough concluded, suggests that McConnell is in the pocket of Russia and Russian oligarchs who may have bribed him:

“How can ‘Moscow Mitch’ keep denying that Vladimir Putin continues to try to subvert American democracy?”

We’ve long thought that President Donald Trump is the biggest threat to American democracy, but it’s beginning to look like McConnell is actually the person who poses the most danger to the future of this country. Hopefully Kentucky voters will rid us of this cancer in 2020.