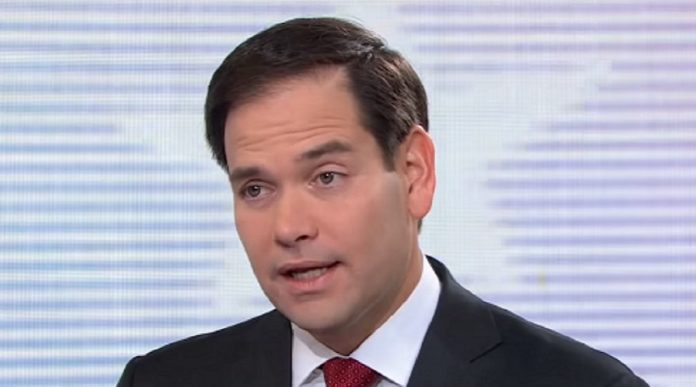 President Donald Trump’s racist attack on Rep. Ilhan Omar (D-Minn.) has already incited death threats and hate speech against her. But now Senator Marco Rubio (R-Fla.) is inciting more of the same by sharing a deceptively altered video of Omar to make her sound bad.

During an interview with Al Jazeera in early 2018, Omar was asked by reporter Medhi Hasan about American hatred of Muslims and how conservatives claim such hatred is actually fear of terrorism. In response, Omar rightfully pointed out that if fear were the case, Americans should fear white men more because they’ve killed more Americans in acts of domestic terrorism than Muslims have since 9/11.

“I would say — our country should be more fearful of white men across our country, because they are actually causing most of the deaths within this country,” she said. “And so if fear was the driving force of policies to keep America safe, Americans safe inside of this country, we should be profiling, monitoring, and creating policies to fight the radicalization of white men.”

Again, this is Omar’s full quote, and it matches up with what other law enforcement officials have said in their own assessments.

But, like throwing gas on the fire, Rubio echoed Trump’s attacks by sharing a video that makes it sound like Omar is outright calling for the profiling of white men without any of the context that came before that part of her quote. Then he had the nerve to call for the media to “hound” Democrats over it.

I am sure the media will now hound every Democrat to denounce this statement as racist. Right? https://t.co/UewkblF8Oo

Clearly, Rubio owes Omar an apology for calling her a racist and inciting hate against her. And he should immediately take down this video.

Many Twitter users, including Hasan himself, called for him to do exactly that.

Senator @marcorubio will you delete this tweet and apologize? You’re sharing a selectively-edited video from my show @AJUpFront to make @IlhanMN look bad and increase the number of death threats she already gets. Shame on you. Here’s the un-edited clip:https://t.co/1xX5KMns8N https://t.co/9lOAr67iCX

The video you are linking to was manipulated and you should delete this tweet https://t.co/fZbvCy0RHZ You are part of the problem.

I am sure you will apologize for falling for a deceptively edited video. Right? https://t.co/Xc8RrbOJva

You can’t possibly be this stupid

He knew it was misleadingly edited already. That’s why he shared it. Marco counts on lies and half-truths to fool his base.

For what? She is correct. pic.twitter.com/Mh4fy2joVe

Hey, genius, this clip has been selectively edited.

So are you retweeting this deceptively-edited video because you’re incompetent or malicious? Pick one

Indeed, either Rubio is a complete moron who didn’t bother to do research to make sure the video was complete and legit, or he knew and didn’t care because he wanted to gin up hate. Either way, he should no longer be in the United States Senate.