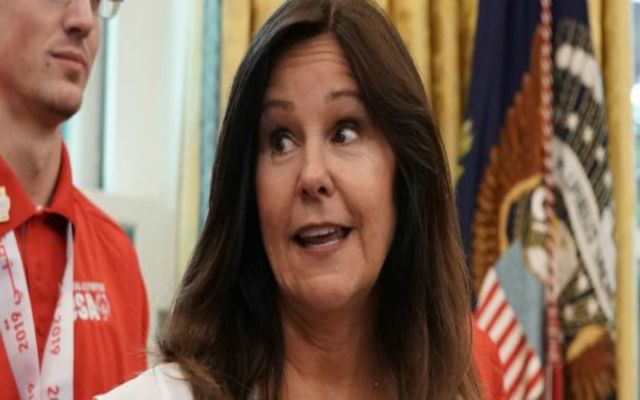 On the very same day a book detailed dozens of new allegations of sexual assault by President Donald Trump, Second Lady Karen Pence was a featured speaker at a “Women for Trump” event in Saint Paul, Minnesota, where she declared that Trump’s presidency has been effective in empowering women across the country.

During her remarks to a group of Republican women, the wife of Vice President Mike Pence remarked:

“The president has empowered women like no other. He cares about meeting them where it counts: in their pocketbooks…. Look at the job rate for women. You have to vote for Donald Trump.”

But as HuffPost notes, that’s certainly not what recent polling shows:

Trump in his 2½ years in office has been bleeding support from women voters – particularly suburban, college-educated women who have historically favored Republicans. Wednesday’s event was among a series his campaign is planning to try to reverse the trend.

Mrs. Pence also claimed that the way she has seen the president treat his daughter, Ivanka, who serves as a White House adviser, proves that he cherishes women:

“The respect he has for his daughter, it’s amazing.”

As you might expect at a Trump campaign event, the vast majority of the women who attended said they were also impressed with what Trump has accomplished since taking office.

Nancy Vergin was one of about 250 other women who attended the “Women for Trump” rally, and she commented:

“Our president has been exemplary. I can’t believe how much he has accomplished.”

Lindsay Nelson, a 30-year-old IT consultant, didn’t attend the rally, but said she would be voting for Trump in 2020:

“I think the changes in the economy have been really good.”

As for Trump’s often controversial and abrasive remarks and actions, Nelson noted:

In the next breath, however, Nelson admitted that she’s an outlier among her social circle:

“Most of the women I know don’t think the way I do.”

When it comes to how Donald Trump treats women, consider this: In a 2005 interview with radio host Howard Stern, Trump lasciviously bragged that he liked to walk into the backstage changing rooms at the Miss USA pageant and catch contestants half naked.

That was confirmed by Tasha Dixon, a former Miss USA contestant:

“Our first introduction to him was when we were at the dress rehearsal and half-naked changing into our bikinis. He just came strolling right in. There was no second to put a robe on or any sort of clothing or anything. Some girls were topless. Other girls were naked.”