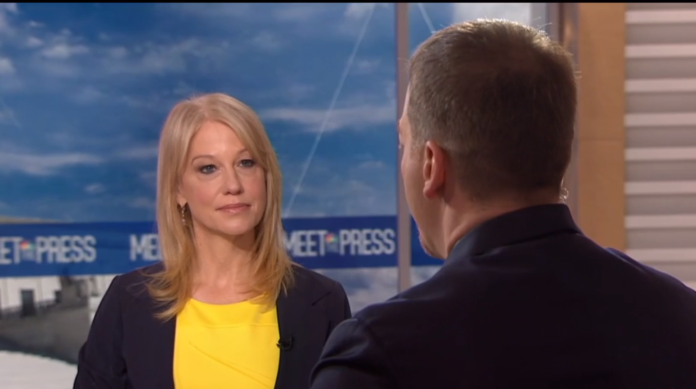 During an appearance on “Meet the Press” Sunday, White House counselor Kellyanne Conway decided she’d attack a Muslim member of Congress instead of try to explain President Donald Trump’s ever shifting plans and policies on the issue of immigration.

Conway began by suggesting that Congress is to blame for any problems with the U.S. immigration system:

“We have an unserious Congress that is not coming to the table.

“The Republicans failed to do their job when they were in charge, no doubt. And the Democrats now are failing to come together in the House.”

Actually, Congressional Democrats were willing to make a deal with the White House on immigration last year, but the president backed away at the last moment when he got criticism from right-wing media.

“The president doesn’t sound like somebody who wants to solve the [immigration] crisis.”

Rather than address that, Conway began attacking Rep. Ilhan Omar (D-MN), a Muslim member of Congress:

“This week, you know, respectfully, from the other side you have this anti-Semitic congresswoman.”

But Todd was having none of it, shutting Conway down immediately:

When Conway suggested that the “invitation is open” for Democrats to meet with Trump on immigration, the NBC News host again used facts to silence her:

“What part of shutting down the government, I’ll do this, that’s not how anybody would be coerced to saying, yeah, let’s sit down and see if we can come and reach common ground?”

To prove just how inflexible Trump is on immigration, take a look at this tweet he sent out Sunday morning:

Just out: The USA has the absolute legal right to have apprehended illegal immigrants transferred to Sanctuary Cities. We hereby demand that they be taken care of at the highest level, especially by the State of California, which is well known or its poor management & high taxes!

Does that sound like someone who’s ready to listen to reason or negotiate in good faith?