The United States Blues
Home Politics Congress Marco Rubio gets burned to the ground for defending Trump with a... 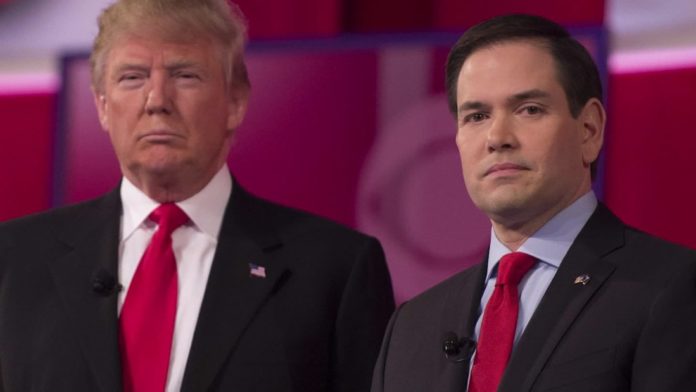 Poor little Marco Rubio! He desperately wants to be relevant and prove his devotion to President Donald Trump, but as he learned on Thursday, doing so comes with a price: Endless social media mockery.

Rubio (R-FL) often tweets out Bible verses from his Twitter account. For example, as Hurricane Dorian was about to hit Florida in early September, he sent out this message:

God is our refuge and our strength,an ever-present help in distress. Thus we do not fear, though earth be shaken and mountains quake to the depths of the sea,Though its waters rage and foam
and mountains totter at its surging.

But on Thursday morning, Rubio thought he’d dive headfirst into the ongoing impeachment inquiry being conducted in the House:

There’s only been ONE man EVER who was always right & deserves blind loyalty & his name was Jesus;

No matter what a Republican does the left will never be fair to them. What they want is Republicans who will douse themselves in kerosene & light a match.

It didn’t take long for Twitter to react with anger and scorn:

most of the public: “please investigate the president’s crimes”

marco rubio: “WHY do you want US to SACRIFICE ourselves like the RISEN LORD” https://t.co/CSZLm9V2Co

b) The real problem is liberals are mean to us https://t.co/FhAmW0jc7Q

Hiding behind religion to excuse the mobster wannabe in the White House. The Republican party of the 21st century.

Quit being so dramatic. Nobody is asking you to light yourself on fire and commit suicide. We are asking you to uphold the laws you swore an oath to adhere to and protect. That’s it. If you can’t do that, move on. https://t.co/cHbced834p

You are so pathetic… and y’all doused yourselves in kerosene and lit a match long ago – when you fell in line behind, & then circled your wagons around, the immoral criminal racist traitor Donald Trump, the most patently unfit person to hold the office of president in history.

Too bad your party doesn’t practice what Jesus preached. The bigotry, the hate, the misogyny, the greed. “And Jesus wept” “ https://t.co/4uJtRmM3QZ

I’m Marco Rubio, I like to quote bible verses. I don’t live by them, I just like to quote them while I continue to support an egotisitcal rapist that pisses on the constitution daily.

Perhaps Senator Rubio should consider another verse of scripture, Isaiah 6, which reads:

“And he said, Go, and tell this people, Hear you indeed, but understand not; and see indeed, but perceive not.”