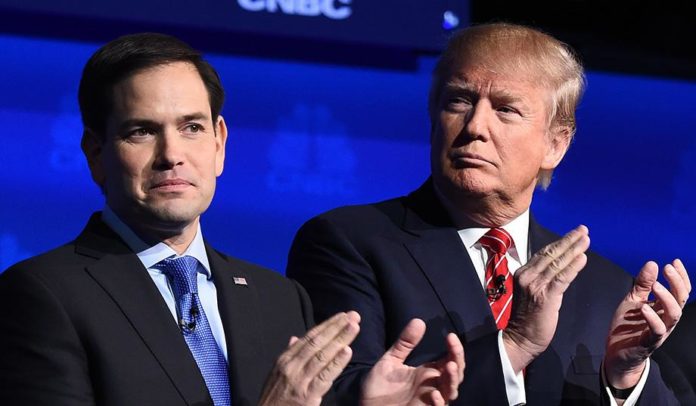 It has become apparent that just about every Republican needs to delete their social media accounts, if only to avoid the embarrassment and humiliation they bring upon themselves with their ill-time and frequently tone deaf postings.

Such is the case with Senator Marco Rubio, who must have thought there couldn’t be anything controversial about sharing a Bible verse on Twitter:

There are 6 things the LORD hates,7 are an abomination;
-arrogant eyes
-a lying tongue
-hands that shed innocent blood
-a heart that plots wicked schemes
-feet that are quick to run to evil
-the false witness who utters lies
-the one who sows discord among kindred.

Wow! Is Rubio really so clueless that he didn’t consider that President Donald Trump meets every single one of these conditions? Think about it:

Here’s a look at some of the best responses to Rubio’s tweet:

Sounds like you’re saying the lord hates trump and the Republican Party in general.
Because you’ve basically described all that they do.

33 “‘When a foreigner resides among you in your land, do not mistreat them. 34 The foreigner residing among you must be treated as your native-born. Love them as yourself, for you were foreigners in Egypt. I am the Lord your God.

Your cognitive dissonance is malignant. How you can tweet bullshit like this and not see what a hypocrite it makes you is truly astounding. I don’t know how your Bible hasn’t just burst into flames by now, you wilted cabbage head.