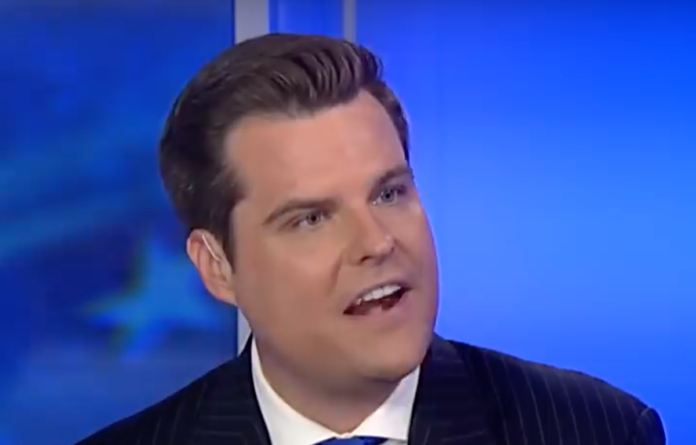 When you elect someone to Congress you expect a certain level of maturity. You expect that person to represent your region with a certain level of class and intelligence. You expect that person to put the interests of the people in your area ahead of partisan politics, to serve the Constitution, and to make you proud of your choice to cast a ballot for them.

So for the people of the Florida panhandle in the 1st congressional district, it must be humiliating indeed to watch Representative Matt Gaetz behave with all the class of an adolescent thug on behalf of Donald Trump.

Gaetz had the sophomoric inspiration to introduce a bill designed as a partisan meritless affront to the current House Intelligence chair: Adam Schiff (D-CA), the man who is bringing back legitimate credible investigations to the House. That’s thanks to millions of midterm voters. Schiff has a clear mandate from the people to serve as a check and balance on the executive branch, a function that Republicans refused to take seriously when they had control. Now they are arguably even worse.

Taking a cue from Trump’s insults on Schiff, Gaetz introduced the Preventing Extreme Negligence with Classified Information Licenses Act, or PENCIL Act. The name of the bill alone tells you all you need to know about it – it’s meant to bring a demented smile to Trump’s face, who has attacked Schiff as “little pencil neck Adam Schiff.”

Gaetz is trying to get Schiff kicked off the House Intel Committee with a Trumpian 'PENCIL Act' resolution https://t.co/8BJhswiQBL pic.twitter.com/rPfKAy8VWK

To the majority of Americans, this is not only an insult to Adam Schiff, but to every person who votes because they want real progress made to improve the lives of their fellow citizens. Instead, taxpayer resources are squandered so that Republicans in the house can smirk and nod about “their favorite pencil” as they wring their hands about not having the power to obstruct anymore.

Yesterday, I filed the "PENCIL Act" to remove @RepAdamSchiff from the Intelligence Committee. If Schiff is able to review covert operations and intelligence and we have to rely on his representations after he lied to the American people, our system is broken. #PencilAct pic.twitter.com/Dc1Z8ydaL7

Gaetz’s resolution shamelessly accuses Schiff of being untrustworthy. Judging by voter turnout in the midterms, the majority think otherwise. Americans turned out in the highest numbers since 1914. Two-thirds of Americans believed this election was the most important midterm in their lifetime. Gaetz’s behavior proves they were right.

Note to Gaetz: That wasn’t because it was Schiff who was untrustworthy, it was because the House under Republican majority control was transparently partisan and arguably corrupt.

Schiff has the responsibility to serve as a check and balance on the executive branch, a function that Republicans refused to take seriously when they had control. Nevertheless, Gaetz introduced PENCIL with the following claims, even as the Mueller report remains hidden from public view by Trump’s AG, William Barr.

“The proposal claims that Schiff ‘can no longer be trusted by his colleagues in Congress or the American people’ and that he ‘has repeatedly slandered President Donald J. Trump by falsely claiming he colluded with Russia to win the presidency.’ It also calls for Schiff to have his security clearance withdrawn.”

#BREAKING: Today I filed the “PENCIL Act,” expressing the sense of the House of Representatives that “Congressman Adam Schiff should be removed from the House Intelligence Committee and his security clearance immediately revoked.” pic.twitter.com/1FsMt6NUjr

Although it might be easy to dismiss such a lowbrow attack on Schiff, the grave problem is that the conduct of our Republican Congress is plainly a joke, which disrespects the serious business that we expect to be done on our collective behalf. The work of Congress can improve or damage the lives of millions of people. It can also protect the rule of law, the Constitution, and national security when it seems a president may be compromised by foreign influence.

Instead, we watch a partisan football game and people like Matt Gaetz who think their job is to serve as Donald Trump’s disrespectful cloddish roughneck.

The insult is not just directed at Adam Schiff, who deserves our admiration for handling his duties with grace, dignity, and impeccable skill. The insult from Matt Gaetz is an affront to every person who voted to restore real oversight to our formerly Republican sycophant-controlled Congress. If only Florida had elected a person who took his job seriously enough to put the interests of the people before insultingly ignorant games. Republicans under Trump have the green light to abandon any pretense of bipartisan interest.

Because we live in the dumbest possible timeline, here's Rep. Matt Gaetz (R-FL) pushing for Adam Schiff to be ousted as he unveils his "PENCIL Act" on Tucker Carlson's show.

"For our favorite pencil, Tucker!"

We all have to show our support for Adam Schiff today, and trust he is fully capable of serving the people proudly, respecting the stature and responsibility of the office he serves.

Thank God the American people turned out to vote.

What happened when ‘little pencil-necked Adam Schiff’ took an eraser to Trump and his GOP enablers https://t.co/7NeeErSgJz #MorningJoe