The United States Blues
Home Politics Congress McConnell: Alabama Made A ‘Mistake’ By Not Sending Roy Moore To The... 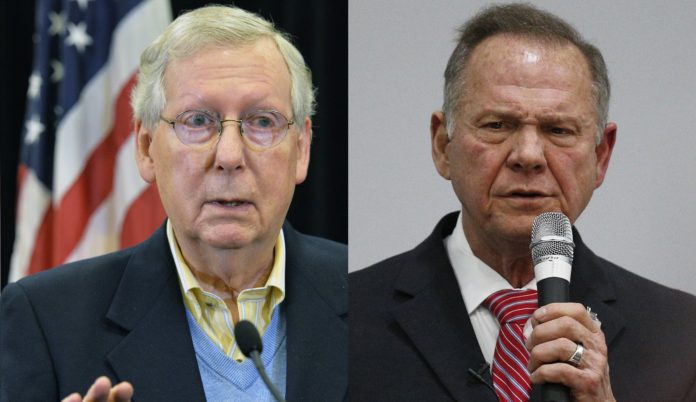 A year ago, when Alabama GOP Senate candidate Roy Moore was accused of sexually molesting girls as young as 14, Senate Majority Leader Mitch McConnell was asked if he believed Moore or the women accusing him. McConnell replied:

“I believe the women, yes. I believe he (Moore) should step aside.”

But now, just 13 months after Democrat Doug Jones won the Alabama special election, McConnell is singing a much different tune, telling the Wall Street Journal CEO Council that the people of Moore’s home state made a big “mistake”:

This is what the modern-day Republican Party has come to: Defending sexual predators, pedophiles, and perverts of every stripe as long as they promise to vote the right way if and when they get to Washington.

Since the rise of Donald Trump in 2015 as part of the GOP, there have been repeated instances of how Republicans are willing to toss morality aside in the interest of political expediency. Many of the same conservatives who claimed to be deeply offended when Trump bragged to “Access Hollywood” reporter Billy Bush that he liked to grab women “by the pussy” have now become eager sycophants and cheerleaders for this immoral president.

More recently, the GOP was only too eager to overlook charges of alcohol abuse and sexual assault by Brett Kavanaugh as he sought to be confirmed to the Supreme Court. McConnell and others in his party tried to excuse the alleged actions of Kavanaugh by claiming Democrats were merely trying to keep a conservative off the high court.

And now we have McConnell telling the people of Alabama that they made a mistake when they rejected a man who was banned from a mall in Gadsden, Alabama, for his unwanted advances toward young girls in the late 1970s.

Republicans have long maintained that they’re the party of “family values,” but their actions speak so much louder than their empty platitudes.