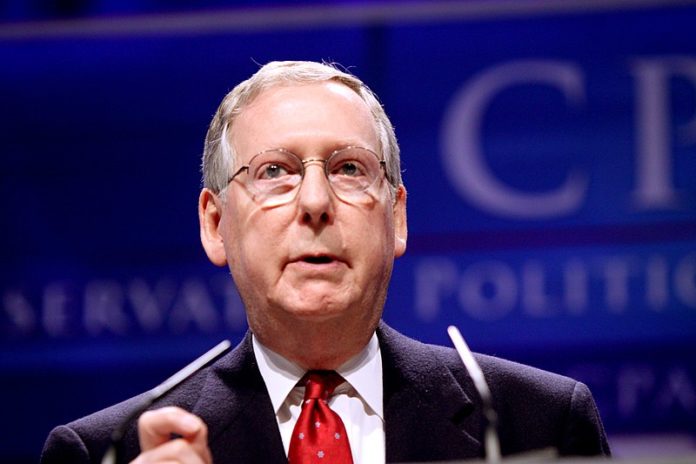 As the Republican controlled Senate continues to refuse to vote on a bill House Democrats passed to end the government shutdown without President Donald Trump’s wall, a 2013 statement by Senate Majority Leader Mitch McConnell (R-Ky.) has come back to bite him on the ass.

It was just a couple months ago when McConnell claimed that there won’t be a government shutdown and that such a tactic by either party is a futile exercise.

He knows this because Senator Ted Cruz (R-Texas) incited House Republicans to shut the government down in 2013 in an effort to force then-President Barack Obama to repeal the Affordable Care Act.

Of course, that didn’t go down well for Republicans as they were blamed for the shutdown by the American people and failed to get what they demanded.

After that shutdown ended, McConnell insisted that Republicans will never shut the government down again.

Yeah, that statement is totally backfiring now as the latest shutdown caused by Trump in an effort to force Congress to pass funding for his border wall has made a liar out of McConnell as Americans once again overwhelmingly blame Republicans for the shutdown that is entering its third week.

Federal workers have not been paid in three weeks, and that means this shutdown and the forced vacation federal employees have been sent on are conservative policy in the era of Trump.

And rather than do something to end it, McConnell has crawled into a dark hole to hide.

“Why is Leader McConnell shuffling off to the sidelines, pointing his fingers at everyone else and saying he won’t be involved?” Senate Minority Leader Chuck Schumer asked according to Bloomberg. “Probably because he realizes this president, President Trump, is erratic, unreliable, and sometimes irrational. America needs Leader McConnell to get involved to stop this shutdown.”

Indeed, McConnell could end this shutdown right now by putting the current House bills up for a vote. Enough votes would mean a veto-proof bill goes to the White House, and if Trump does not sign it the Senate and House can vote to override it and the government will get back to being open for business. Republicans could be given credit for doing the right thing and for standing up to Trump. It’s a win for everyone except Trump.

And that’s probably why McConnell is content with going down with the sinking ship.

If he sides with Democrats against Trump, the shrinking conservative base will turn on Republicans.

However, it should be pointed out to McConnell that the American people blame Trump for this shutdown while congressional Republicans unscathed so far. But if McConnell continues to block a vote on a House bill that Republicans unanimously passed in December, Americans could shift their ire towards Senate Republicans, which would be bad for them considering the stakes for the GOP in the 2020 Election are high.

And now that McConnell’s 2013 remarks are back in the news, it’s only a matter of time before Americans realize that while Trump started the government shutdown, it’s the Senate Republicans who are refusing to end it.