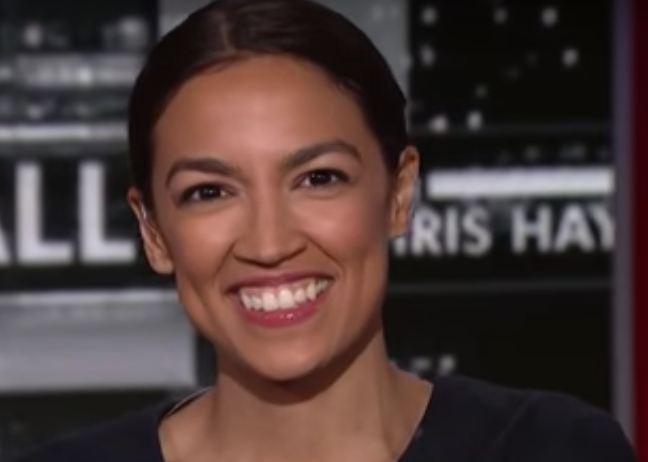 For over 30 years, Republican trickle-down tax policy has done nothing but make the rich richer while the rest of us wait for a trickle of money that never comes, all while our nation suffers widening income inequality along with massive debts and deficits.

It’s a policy that should have ended decades ago, but Republicans double down on it every time they are back in power, and the results get worse. In December 2017, President Donald Trump and the Republican Congress passed a new massive tax giveaway for the wealthy that robbed the Treasury of desperately needed revenue and stuck middle class and poor Americans with a debt that will take generations to pay off at the current tax rates. Even Republicans know their tax policies don’t work.

But Ocasio-Cortez wants to change that by making the wealthy finally pay their fair share, and that means a return to a top tax rate not seen since before 1980 and a fair progressive tax rate that has been under assault by the GOP for decades.

“People are going to have to start paying their fair share in taxes,” Ocasio Cortez said in an upcoming interview on 60 Minutes.

“You know, you look at our tax rates back in the ’60s and when you have a progressive tax rate system, your tax rate, you know, let’s say, from zero to $75,000 may be ten percent or 15 percent, et cetera,” Ocasio-Cortez continued. “But once you get to, like, the tippy tops, on your 10 millionth dollar, sometimes you see tax rates as high as 60 or 70 percent. That doesn’t mean all $10 million are taxed at an extremely high rate, but it means that as you climb up this ladder you should be contributing more.”

Republicans and even some Democrats have criticized her plan, but noted economist Paul Krugman not only supports her plan, he backed up her economics on Twitter:

This is a good discussion of AOC’s call for a top tax rate of 70-80%. Tl; dr: she’s actually saying what top public finance economists have been saying for some time. Not at all outlandish. 1/ https://t.co/Uw1Sd5NUdi

A small quibble is that many wealthy Americans also face state and local income taxes, and that the Diamond-Saez calculation should include sales taxes as well. My rough estimate is that high-income New Yorkers already pay 55-60% marginal rates. But her economics here is fine 2/

And let’s contrast it with what everyone on the Republican side claims: that lower marginal rates on top earners have huge economic benefits. This has no basis in economic research, or in evidence 3/

He continued in a New York Times op-ed by pointing out that the United States employed much higher tax rates during World War II and that the wealthy were taxed at 70 percent until Ronald Reagan took office.

“It’s a policy nobody has ever implemented, aside from the United States, for 35 years after World War II — including the most successful period of economic growth in our history,” he wrote. “When taxing the rich, all we should care about is how much revenue we raise. The optimal tax rate on people with very high incomes is the rate that raises the maximum possible revenue.”

As for the GOP, Krugman wrote that they can whine all they want, Ocasio-Cortez knows more about economics than they do.

“So AOC, far from showing her craziness, is fully in line with serious economic research,” he concluded. “She definitely knows more economics than almost everyone in the G.O.P. caucus.”

The fact is that this country is in desperate need for a return to progressive tax policy, which built the strong middle class that made American an economic superpower. We’ve done it before, we should do it again.