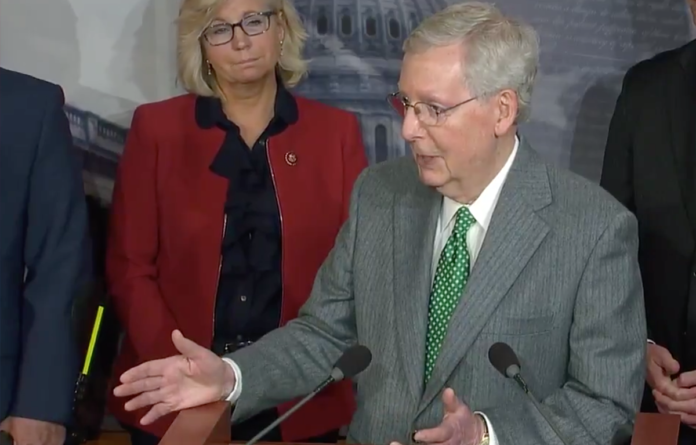 The Senate Majority Leader, Mitch McConnell (R-Ky.) refused to allow former President Obama to issue a bipartisan warning to the American people about Russian interference prior to the 2016 presidential election. As a consequence, millions of people have lost hope in election integrity, much less getting the leaders that the majority vote for.

Now on Wednesday, the senatorial tortoise blatantly refused to allow a vote in the upper chamber on a House election reform bill called the “For the People” Act, or HR-1.

According to the Hill:

When asked why he chose to block a vote on the bill, McConnell offered a smug response:

“Because I get to decide what we vote on,” said McConnell.

Following his response, hear the laughter of representatives confident that the People are powerless to stop them. So much for democracy?

Q: "Why is the #GreenNewDeal getting a vote in the Senate when #HR1 is not?"@senatemajldr: "Because I get to decide what we vote on." pic.twitter.com/3AMXoedktS

McConnell claimed that the reason the bill would not make it to a vote was that it has too many pages in it.

“This sprawling 622-page doorstop is never going to become law. I certainly don’t plan to even bring it to the floor here in the Senate,” McConnell said of the legislation Monday.

He then admitted that our elections are in need of reform.

“There’s always improvements and reforms to be made, but this certainly isn’t.”

No person in American history has done more to damage democracy than @senatemajldr Mitch McConnell. https://t.co/YxHanSsDFU

McConnell previously refused to consider making Election Day a National Holiday in January. He called the For the People Act a “power grab,” but the point is the power is to be restored to the people, not people like McConnell.

“This is the Democrat plan to restore democracy?” said Mr. McConnell, Republican of Kentucky and the Senate majority leader, chuckling to himself. “A power grab that’s smelling more and more like exactly what it is.”

Representative Ted Deutch (D-Fl) shared his response on Twitter, noting that the bill is an attempt to restore the power to the American people.

McConnell appears to be blatantly working against fair elections.

An Election Day holiday WOULD be a power grab.

It would be the American people grabbing power back from the wealthy special interests that dominate Washington because @senatemajldr & others prefer that it be hard to vote. #ForThePeople https://t.co/g9zZNRrxWX

Other important ideas of the For the People Act:

Ask yourself: What is Mitch McConnell so afraid of? The answer is transparent.

He’s up for re-election in 2020 & counting on that corruption cash and gerrymandered districts to win.https://t.co/0DdRBAfqej

“Come on. This idea that having more people vote is a Democratic power grab when it’s part of the fundamental root of our democracy – it’s an act of desperation by the Republican leader,” said Schumer.

SCHUMER: "Leader McConnell, we're proud that we want more people to vote. Why are you ashamed of it?… it's a dark day for the Republican Party if their leader in the Senate has to argue against more Americans voting because it hurts his party… it's an act of desperation." pic.twitter.com/EvuiVV0Kxt

In fact, it is McConnell who is staging a power grab from the voters.

Mitch McConnell is a disgrace. https://t.co/i4mqH3pxHv

So you decide. Is McConnell blocking a vote on the For the People Act to prevent restoring the power to the People? Does he oppose requiring presidents and vice presidents to release their tax returns? It seems transparent that McConnell is actively working against the People, fair elections, as well as transparency into Donald Trump.

If you agree, please contact your representatives to express your outrage.

In the end, it’s up to all of us to put an end to this and demand fair elections for credible representatives who do their job without corruption.

There is nothing the @GOP under @realDonaldTrump and @senatemajldr fear more than democracy. Keeping their immoral minority in power is totally dependent on suppressing the will of the majority. What’s more un-American than being scared of a fair vote?@Morning_Joe https://t.co/sLAnTyJgT4