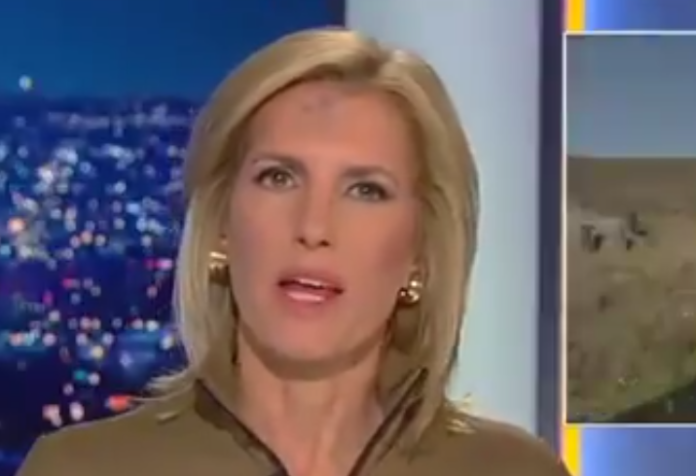 Fox News host Laura Ingraham put her bigotry and racism on full display on Wednesday night when she heartlessly told migrants seeking asylum in the United States to apply for it from the “safety” of their home countries.

During the rant, Ingraham claimed that migrants should be turned away from the border because of what is happening to young people during their journey to get here.

“Girls are being abused, raped, and in some cases trafficked as part of these caravans,” Ingraham said. “It is despicable what is happening to these young people. Congress needs to get its head out of the sand and stop this madness once and for all. If someone crosses the border illegally, with rare exception, they should be turned back immediately.”

Talk about lack of compassion, especially since Ingraham had visible ashes on her forehead in recognition of Ash Wednesday, a Christian holy day.

Then in a complete lack of understanding why migrants are fleeing to America in the first place, Ingraham told them they should apply for asylum to the United States within their home countries instead of doing it at the southern border.

“If you want to apply for asylum, that’s fine,” she said. “But you should do so in the safety of your home country.”

Except that their home countries are not safe at all, and trying to apply for asylum could result in them being assaulted or killed by the very government they want to escape.

Furthermore, migrants cannot apply for asylum from another country. They must do so on American soil or at a port of entry, such as those along the border. That’s the law, something Ingraham apparently does not understand.

Twitter users responded to Ingraham with merciless mockery and ridicule.

Laura Ingraham: “If you want to call the fire department, that’s fine. But you should do it from inside your burning home at the time.” https://t.co/twZfSfGYvm

.@IngrahamAngle Hi Laura, if you cared to inform yourself, you’d know that the law requires you to be physically present in the United States to request asylum. If you don’t know about something, don’t talk about it. pic.twitter.com/syE0b35Aiu

Hey @IngrahamAngle, “asylum” LITERALLY MEANS fleeing to a safe country from an unsafe one and then seeking legal protection in that safe country.

What you’re saying is the U.S. should shut down asylum, period. https://t.co/opN3jIoh8M

Laura Ingraham gave up compassion and decency for Lent…or rather, forever.🤬 https://t.co/N5O4Cbj36R

Gosh, why don’t those pesky asylum seekers think of applying for asylum from the idyllic safety of their own country, where they can be raped by drug gangs, murdered by cartels, or be forced into becoming a sex slave while they wait? If only they had listened to Laura Ingraham! https://t.co/dz2Md1QVw2

Laura Ingraham: “If you want to apply for asylum, that’s fine. But you should do so in the safety of your home country.”

Reality: The US does not grant asylum in its diplomatic premises abroad.pic.twitter.com/ixiOYwYQRE

Oh right….as if these very poor families, who deal with murderers, gangs and the like, have the luxury of having a computer or even internet access to “apply” from their own countries. Laura Ingraham is the whitest of trash.

This is everything that’s vermischt about Trump’s immigration policy, all wrapped up in one stupid comment. https://t.co/utGuzGvpNf

They must come to the United States to apply. That is the law. pic.twitter.com/BMxevvAA6u

.@IngrahamAngle, as a conservative and a Catholic, surely you know of “Chesterton’s fence,” named after G.K. Chesterton. It’s a bedrock principle of conservatism: don’t tear down something until you know why it’s there. Do you know why asylum law is the way it is?

President Donald Trump caused the humanitarian crisis at the border by refusing to provide more personnel to process asylum claims at a speedier pace, resulting in long lines that have made desperate people even more desperate. That’s why many simply choose to cross the border illegally. They are that desperate to save their lives and the lives of their children, whom Trump’s administration has been placing in cages in internment camps rather than keeping families together.

Ingraham’s rant is going to get people killed and this kind of blatant misinformation campaign should result in her show being pulled off the air.