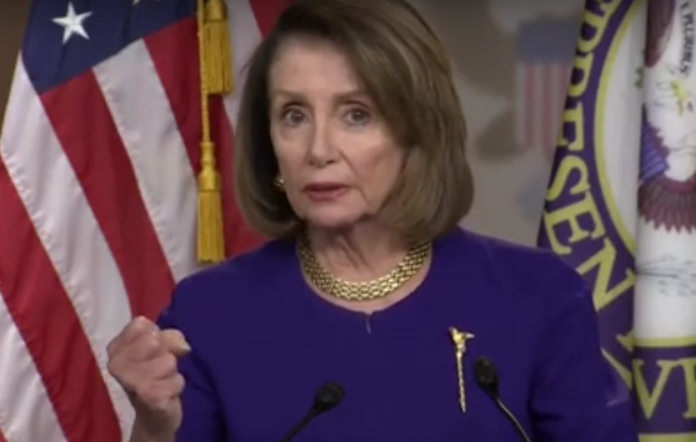 House Speaker Nancy Pelosi (D-Calif.) commented on President Donald Trump’s whining about investigations against him by various congressional committees on Thursday by treating him like a petulant toddler.

Just a day and a half after calling for investigations against him to end during his State of the Union address, Trump threw a massive tantrum after learning that House committees are preparing to dig deeper into his financial and business dealings. He even went so far as to accuse them of “presidential harassment” and declared that oversight of the president should not be allowed in the future:

So now Congressman Adam Schiff announces, after having found zero Russian Collusion, that he is going to be looking at every aspect of my life, both financial and personal, even though there is no reason to be doing so. Never happened before! Unlimited Presidential Harassment….

….The Dems and their committees are going “nuts.” The Republicans never did this to President Obama, there would be no time left to run government. I hear other committee heads will do the same thing. Even stealing people who work at White House! A continuation of Witch Hunt!

PRESIDENTIAL HARASSMENT! It should never be allowed to happen again!

Well, when a reporter asked Pelosi for comment on Trump’s hissy fit, she largely refused to comment, only saying that Trump is “projecting his own unruliness” and that House committees won’t be prevented from performing their constitutional duty to provide oversight.

“Let me just say, I am not commenting on what the president has to say about our work,” Pelosi said. “I always think whatever the president says about us, he’s projecting his own unruliness. He’s a projector and that’s what it’s about. I’m very proud of the work of our committees. Even Republicans have complimented the committees for being wise in how they proceed, in terms of subpoenas and the rest. We will not surrender our constitutional responsibilities for oversight — that would make us delinquent in our duties.”

PELOSI on Trump’s “presidential harassment” tweet: “I am not commenting on what the president has to say about our work. I always think whatever the president says about us, he’s projecting his own unruly-ness. He’s a projector and that’s what it’s about.” pic.twitter.com/1Cp6LnZx4b

Once again, Pelosi demonstrates that she is the adult in the room and that she is in control, unlike the out of control toddler in the White House who can’t stop himself from whining on social media. Perhaps if he were working instead of watching television all the time, he wouldn’t feel the need to constantly lash out. After all, that’s why Pelosi doesn’t comment on everything Trump says. She’s busy doing her job and babysitting the president 24/7 isn’t part of the job description of the House Speaker.