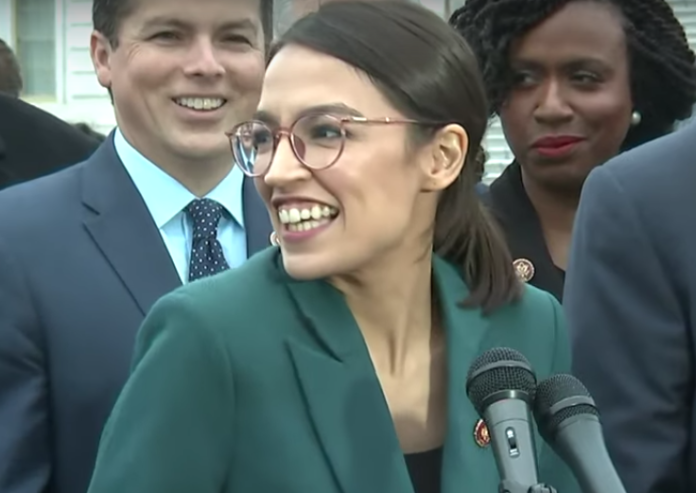 Rep. Alexandria Ocasio-Cortez (D-N.Y.) is standing up in defense of her beloved Girl Scouts after a right-wing writer attacked the organization and called for a boycott because of her participation.

In a post for a conservative publication, Jane Chastain complained that only a handful of female Republican lawmakers were Girl Scouts and expressed disdain for the organization because Ocasio-Cortez used to be a Girl Scout.

“The Girl Scouts are celebrating the victory won by their alums in the 2018 midterms on its website, beginning with their star, Alexandra Ocasio-Cortez, who attributes much of her success to what she learned as part of this organization,” Chastain wrote. “Now Girl Scout alums make up 72 percent of female senators and 60 percent of the women in the 116th Congress. Although the website tries to strike a bipartisan tone, it is no accident that, among this year’s freshmen, Carol Miller is the only Republican, and she is much older, 68, than the rest. Her training in scouting was well before the feminist takeover that occurred in 1970.”

“So before you decide to embrace an International Women’s Day celebration or buy the cookies, ask yourself, “Will the country be better off with more representatives like the young socialist Alexandra Ocasio-Cortez?” she asked, declaring that she will no longer support the Girl Scouts.

“The Girl Scouts were an important part of my formative years, and I sold hundreds of boxes of these cookies myself, so I considered it payback, paying it forward so to speak. Not anymore,” she concluded.

So conservatives now believe that the Girl Scouts are bad because some of them grow up to become liberal activists and lawmakers. That’s beyond petty and ignorant. And it should be pointed out that Chastain couldn’t even get Ocasio-Cortez’s first name right.

The Girl Scouts empower young girls and women to be independent, work together and solve problems. And it doesn’t hurt that the cookies are delicious and helps fund the organization for future generations.

Ocasio-Cortez responded to the attack by vowing to buy more cookies and went on to praise her district’s Girl Scout Troop.

PS I am extraordinarily proud of the role my constituents have played in helping to establish + support Troop 6000, the first-ever @girlscouts troop for girls experiencing homelessness: https://t.co/5VHY4X0yed

.@girlscouts is how I first practiced how to change brake fluid, start a fire, practice self-defense, recreate the NASA Challenger mission, and v importantly: learn to teach myself new skills + navigate ambiguity. 🚀

There’s a reason a large of Congresswomen are former scouts! https://t.co/N21KNVN5ZV

In fact, Ocasio-Cortez is so close to the Girl Scouts that she credited the organization for preparing her for public service after she won her race for Congress in 2018.

“I was a Girl Scout and learned so many life skills, from entrepreneurship to baking to survival skills. It’s amazing at encouraging confidence and curiosity from a young age. Many women of Congress started out as Scouts too!”

Clearly, conservatives like Chastain hate the Girl Scouts now because it turns girls into strong women who can think for themselves and offer bold ideas to propel our nation and society forward into a brighter future.