The United States Blues
Home Economics Ocasio-Cortez gives Trump a lesson in how to deal with supporters who... 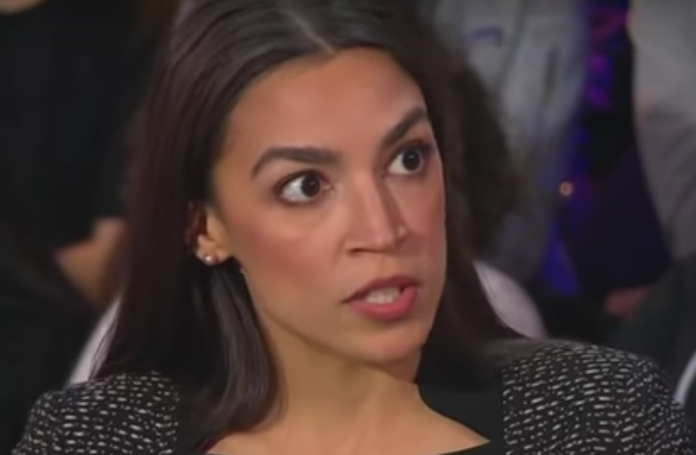 Rep. Alexandria Ocasio-Cortez (D-N.Y.) participated in a town hall event to discuss the Green New Deal on Friday, but how she handled a heckler who attacked her Republican counterpart is a lesson President Donald Trump should learn.

Appearing with former Rep. Bob Inglis (R-S.C.), whom the Tea Party primaried out of office in 2010, Ocasio-Cortez defended herself against the accusation that she’s the “Tea Party of the left.”

Another “big difference” she noted is that the billionaire Koch brothers funded the Tea Party while her campaign was funded by everyday people.

The topic then turned to the Green New Deal, which Republicans recently blocked in the Senate by holding a sham vote in an effort to use Democratic voting records against them in 2020. Democrats refused to take the bait since it was clear Republicans had no intention of letting the legislation pass.

Inglis argued that it would be impossible for Congress to pass all of the tenets of the deal in one session, and suggested the focus be on fighting climate change first before going back to pass universal healthcare and the basic income later on.

It’s a fair argument to make, and Inglis did not make his argument in an uncivil manner. But a heckler in the audience rudely demanded immediate action even though Inglis is not in a position to do anything in Congress since he’s no longer a lawmaker.

“Make the changes now, you moron,” the heckler shouted, drawing an immediate rebuke from Ocasio-Cortez.

“And that’s the difference between me and Trump,” she told Inglis after turning back to face him.

Unlike Trump, Ocasio-Cortez rebuked one of her own supporters for attacking the opposition, making it perfectly clear that she refuses to stoop to Trump’s level and that she is nothing like him or his right-wing supporters, many of whom were part of the Tea Party movement in 2010.

AOC is the future of the Democratic Party and the party needs to recognize that because she’s a rising star whose voice will not be silenced. She is willing to speak up and fight for progressive causes, all while shutting down anyone who dares to disrupt her political opponents during a civil bipartisan discussion of the issues. That not only makes her more of a hero to progressives, it gives her more credibility among moderate voters.

Trump and Fox News could learn something from her.