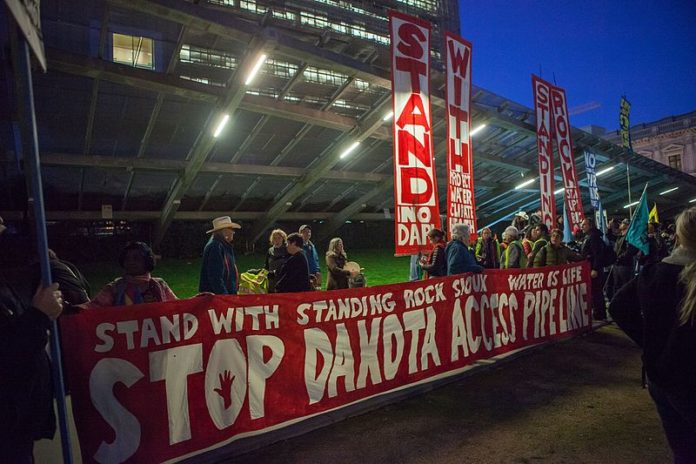 Americans in at least nine states can now be imprisoned for years just for exercising their right to protest as enshrined by the Constitution, and now an oil lobbyist is bragging about his role in pushing the passage of such laws.

For decades, environmentally conscious Americans have protested the building of destructive pipelines across the country that result in spills, fires, and even poisonous water. The fossil fuel industry would have gone extinct by now if not for lobbyists who throw money at lawmakers and buy their way into legislatures across the country.

As the climate crisis continues to get worse, clean forms of energy should dominate our world, but Big Oil is paying to remain dominant, and now they are paying to push state governments to criminalize protests against them.

In his capacity, Morgan appeared at the Energy & Mineral Law Foundation conference in Washington DC and delivered remarks in which he bragged about getting laws on the books to criminalize constitutional rights.

You see, the oil lobby crafted model legislation known as the Critical Infrastructure Protection Act, which they then passed on to the right-wing American Legislative Exchange Council (ALEC) and to the lawmakers who are part of the group.

Those lawmakers then introduced the legislation in their state legislatures, and now nine states have passed it, thus making peaceful protest against oil pipelines illegal and punishable by years behind bars and hefty fines that would cripple anyone financially.

The law even punishes any advocacy groups associated with the protests.

This is the law Morgan had the gall to boast about during his remarks, which were flagged by The Intercept.

“We’ve seen a lot of success at the state level, particularly starting with Oklahoma in 2017,” Morgan said. “We’re up to nine states that have passed laws that are substantially close to the model policy that you have in your packet.”

So far, Texas, Louisiana, Oklahoma, Tennessee, Missouri, Indiana, Iowa, South Dakota, and North Dakota are the only states to pass it, all red states.

However, Morgan claimed that his group is so powerful that they nearly got Illinois to pass it as well.

“We almost got that across the finish line in a very Democratic-dominated legislature,” he said.

“So you see that, and you’re reading the materials as well, that this model legislation would itemize criminal trespass and also a liability for folks that cause damage during protest,” Morgan said. “Another key aspect of it, which you also include, is inspiring organizations — so organizations who have ill intent, want to encourage folks to damage property and endanger lives — they are also held liable.”

As The Intercept points out, anyone who blocks construction of a pipeline, which is a peaceful non-violent action, would be classified as a “violent threat.”

The intentional inflicting of damage to property is already illegal in this country, but these laws seek to crush protest entirely and are clearly unconstitutional. But the way President Donald Trump and the oil industry controlled Senate are stacking the courts with right-wing judges and fossil fuel friendly government officials, it’s only a matter of time before they are able to uphold such laws. In fact, they may already have that ability. Republicans and the oil industry are undermining the Constitution. And these laws are a slippery slope that could encompass any protest or free speech that conservatives don’t like. This is the criminalization of our constitutional rights, and unless Americans stand up and fight back, we will not only lose our democracy, we will lose our planet.