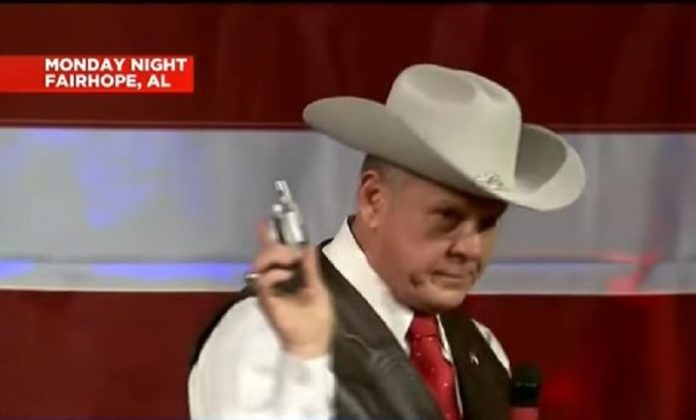 Wow. Just when you thought the excuses for Roy Moore couldn’t get any worse, this right-wing pastor opens his mouth.

Multiple women have come forward in recent weeks to make detailed allegations against the Alabama Republican and senatorial candidate. They claim he preyed upon them when they were teens. One woman was only 14-years-old at time, making Moore a pedophile.

After a letter signed by 50 pastors made the rounds earlier this week, AL.com sought to reach out to every single one of them to get an explanation. And they got a doozy from South Carolina pastor Franklin Raddish of Capitol Hill Independent Baptist Ministries.

According to Raddish, the women accusing Moore of sexually assaulting them should not be believed because women are the real sexual predators. Seriously.

“Women are chasing young boys up and down the road, but we don’t hear about that because it’s not PC.”

It really makes one wonder how many women attend Raddish’s church. And how many will stop attending because of this insult?

Of course, Raddish went on to talk about Donald Trump and Bill Clinton and Al Franken. Raddish said:

“No one told Trump to stand down, what about the allegations against Clinton and his extramarital affair? The Democrats made a laughing stock out of those women. And now Al Franken is keeping his job.”

First of all, many people from across the political spectrum called for Trump to step down after more than a dozen women stepped forward to accuse him of sexual assault. Hell, there was even a tape of Trump admitting that sexually assaults women by grabbing their genitals without their consent. Trump refused to step down, and conservative voters still voted for him.

As for Bill Clinton, he’s not running for office right now or ever again. Roy Moore is, and if conservatives think they are so much better than liberals, they should be screaming for Moore to step aside instead of acting like flaming hypocrites. As for Al Franken, he has apologized, and his apology has been accepted. He has also submitted himself to a Senate investigation. Plus, it does appear that the incident was a failed attempt at humor gone wrong. Franken also has only one accuser, and she was not a child at the time.

But Raddish went even further by blaming the victims and their mothers:

“Also, why did the mothers of these women not come forward. The mother knew, the family knew, and not one of them did anything. Any mother with red blood that found out her daughter had been violated would have kicked down doors. Why didn’t they tell the state police, the FBI, the local sheriff? Because it’s not true.”

Someone should tell Raddish that Moore was a powerful district attorney at the time and it’s likely the girls were too scared and intimidated to challenge him because he was close to judges and police officers. Then he became Chief Justice of the Alabama Supreme Court and became even more powerful.

The fact is that conservatives just can’t bring up Bill Clinton every time one of their own is accused of sexual assault. It makes them look like hypocrites who can’t let go of the past. For Raddish, it’s even worse because he is supposed to be a man of God. How can he blame the victims and trash women in general and still look his female constituents in the eye on Sunday morning?

If the members of Raddish’s church have any shame at all, they’ll oust him immediately and put someone in charge who actually has some compassion.