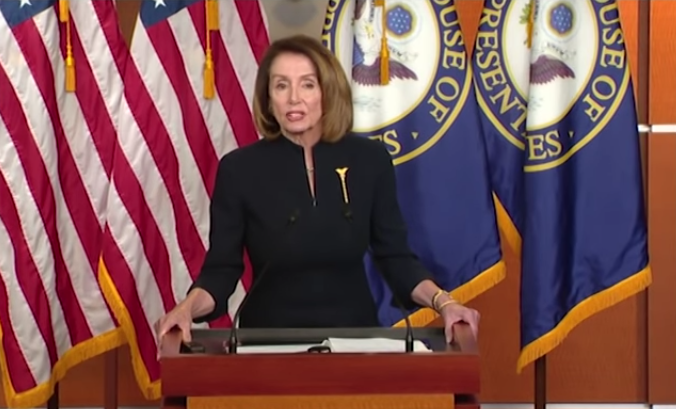 President Donald Trump signaled that he will sign the compromise funding bill to avert a government shutdown on Thursday, he also signaled that he would declare a national emergency to build his wall, drawing a response from House Speaker Nancy Pelosi (D-Calif.) that should put the fear of God into the GOP.

Many Republicans have already condemned Trump’s intention to declare a national emergency, an action that would give him many new powers that he could abuse for his own gain. But his main goal is to steal money from various government departments to fund construction of his border wall, a wall that most Americans oppose.

The decision came after Congress only agreed to provide $1.37 million for 55 additional miles of border fencing instead of the $5.7 billion he had been demanding.

Trump’s national emergency is fake and will likely be declared unconstitutional by the courts, not to mention seen by many Americans as an authoritarian power grab. If Senate Republicans refuse to do anything to stop it, they will also be held responsible at election time, assuming Trump does not use his national emergency powers to cancel the 2020 contest.

But let’s say Trump moves forward with it and doesn’t cancel elections. And let’s say that a Democrat happens to win the race. That’s the scenario Pelosi presented to reporters if Republicans just sit back and let Trump subvert the Constitution.

“It’s important to note that when the president declares this emergency, first of all, it’s not an emergency, what’s happening at the border,” Pelosi began. “It’s a humanitarian challenge to us. The president has tried to sell a bill of goods to America.”

“The president is doing an end-run around Congress, around the power of the purse,” she continued, pointing out that Article I of the Constitution gives the legislative branch the power of oversight and appropriations. She also said that the House is prepared to respond to Trump’s unconstitutional declaration.

Of course, that means Democrats will likely challenge the declaration in federal court, but Pelosi could also introduce a bill to block it. It would pass the House and force Senate Republicans to vote on it, thus demonstrating to the American people just how complicit they are with Trump’s agenda and how much they don’t care about the Constitution.

Pelosi then warned Republicans that Trump is setting a precedent that future presidents could use to deal with real emergencies in our country, such as gun violence and inaccessible healthcare.

“I know the Republicans have some unease about it, no matter what they say,” Pelosi said. “If the president can declare an emergency on something that he has created as an emergency, an illusion that he wants to convey, just think of what a president with different values can present to the American people.”

“You wanna talk about a national emergency, Pelosi said. “Let’s talk about today.”

Referencing the one-year anniversary of the Parkland school shooting, Pelosi observed that gun violence is an epidemic in America and suggested that a Democratic president could declare a national emergency to take away guns, a scenario that Republicans have long claimed to fear. Well, Trump is opening that door by declaring an emergency over a fake crisis.

“A Democratic president can declare emergencies, as well,” she concluded. “So the precedent that the president is setting here is something that should be met with great unease and dismay by the Republicans.”

Are Republicans prepared to let Trump go down this slippery slope? Because while they would get something they want in the short term, they would lose big in the short term since a Democratic president could declare a legitimate emergency in this country to go around Congress and establish tough gun laws that the GOP’s gun nut supporters won’t like at all. Democrats could also declare an emergency to establish universal healthcare, perhaps by shifting a ton of the Pentagon’s budget to pay for it. A Democratic president could also declare an emergency to deal with voter suppression and income inequality. After all, Trump is doing it for a wall, so the GOP better watch out when Democrats take their turn. The only difference is that Democrats will have the majority of Americans behind them.