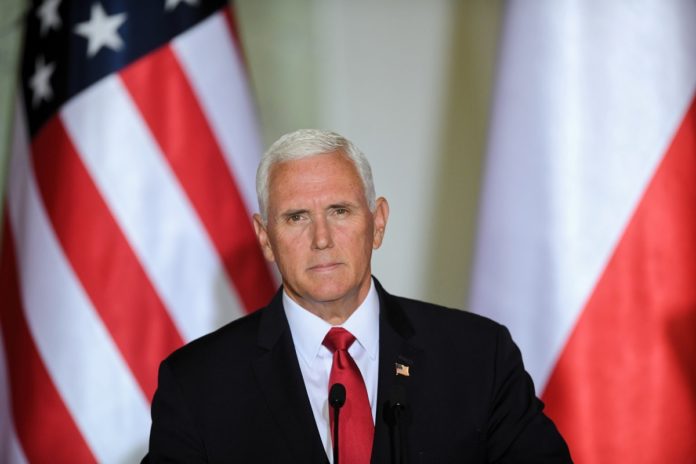 Vice President Mike Pence wants the world to know that Russia is still trying to meddle in elections across the globe, and he even said so during his visit to Poland on Monday, remarking:

“With its efforts to meddle in elections across Europe and around the world now is the time for us to remain vigilant about the intentions and the actions being taken by Russia.”

As HuffPost reports, it appears that Pence’s remarks were meant to comfort his Polish hosts, most notably President Andrzej Duda:

“Pence, who is wrapping up a two-day stay in the city, attempted to dispel any potential doubts from Poland over whether the U.S. is committed to safeguarding its ally from election meddling. Trump has failed to treat the issue seriously despite findings from the U.S. intelligence community indicating Russia played a role in the 2016 presidential election. Poland is preparing for parliamentary elections in October.”

Just last month, however, President Donald Trump said that he thought it might be a good idea to invite Russia back into the G7 group of industrialized nations after they were kicked out for their 2014 attack on Ukraine and annexation of Crimea, remarking:

“I think it’s much more appropriate to have Russia in. It should be the G-8, because a lot of the things we talk about have to do with Russia.”

President Duda certainly didn’t sound like he wanted to extend an invitation to Russia, commenting:

“Unfortunately, over the last several years, Russia has taken actions which cannot be ignored by anyone who respects international law. In this context we need to ask ourselves whether this means we can approach Russia in a business as usual way.”

Trump and his administration are talking out of both sides of their mouths, with Pence trying to play tough guy to counter the president’s fawning obsequiousness whenever the name Vladimir Putin is mentioned.

No wonder our allies are so confused. And if they don’t trust us with Trump in the White House, can you really blame them?