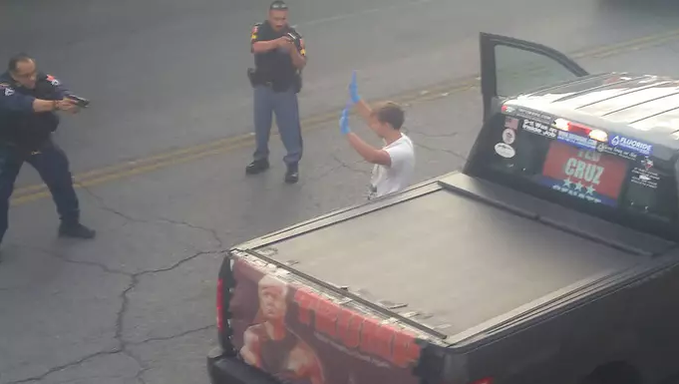 Not even a week after a white nationalist terrorist murdered 22 people in El Paso after posting an anti-immigrant manifesto based on President Donald Trump’s rhetoric, police in the nervous city stopped a Trump supporter from committing another mass shooting.

As the city continued to mourn in the wake of Saturday’s deadly mass shooting, and on the same day Trump visited the city in an effort to get a photo-op with the victims to pretend he actually cares, one of his own supporters clearly did not take his condemnation of white supremacy and gun violence seriously.

Thomas Bartram, a 21-year-old white male Trump supporter, parked his truck and waited outside the Casa Carmelita migrant community center. Armed with a gun and knife while wearing blue latex gloves, he apparently was going to commit a mass shooting before officers stopped him and detained him.

According to the Dallas News:

The 21-year-old drove his pickup — plastered with a Rambo-like image of President Donald J. Trump carrying a large weapon — from Houston for Trump’s trip to the city on Wednesday. He was parked outside the center when police detained him. In the back window was a campaign poster for Texas Sen. Ted Cruz.

But instead of arresting him, the police merely detained him briefly and then released him on the same block as the center he was stalking to terrorize.

Police spokesman Robert Gomez said Thursday that a “suspicious subject” was “detained and interviewed released” because he was carrying his firearm legally. He would not elaborate.

The city is now even more on edge, and the Casa Carmelita shelter is outraged that police only detained the man.

“He was sitting in his truck wearing blue latex gloves, and brandishing a knife,” the center wrote on Facebook. “Police recovered a loaded gun, ammo, and a bag of white powder from his person. Police stated that the gunman has rights, that they cannot search his truck, and that they have no cause to arrest him. An eyewitness saw him brandishing a gun and attempting to enter our building, women were fleeing down the street, warning neighbors as they ran away. We watched officers removing clips of ammo from his person.”

“One officer acknowledged that if they had not arrived when they did, Thomas was likely to have committed acts which would be ‘a different situation’. They released him shortly after, on our block. The number one demographic of mass shooters are young white males,” the center added.

Clearly, this Trump supporter is an active threat to the community and should never have been released. El Paso police failed when their city needed them the most during these trying times. The last thing the city needs is yet another deranged Trump supporter murdering more people in an effort to score brownie points with the white nationalist-in-chief.

Law enforcement should not have to wait for a shooter to pull the trigger to arrest and charge them with domestic terrorism. This man had latex gloves on to make sure he didn’t leave fingerprints on the gun he brought. He planned this out. This was going to be another tragedy. And sadly, that tragedy could still play out.