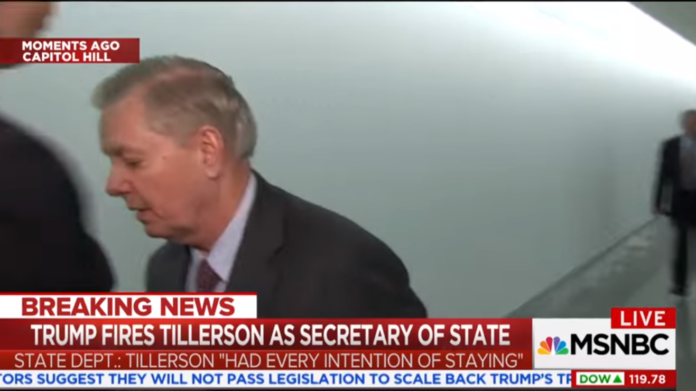 It’s been a strange day in our nation’s capital, but we’ve come to expect those with Donald Trump in the White House.

Tuesday morning, Trump dismissed Rex Tillerson as Secretary of State and replaced him with CIA Director Mike Pompeo. And he did so via Twitter! Tillerson was not notified in advance and had no knowledge of the firing until he heard it on the news.

Within minutes Washington was abuzz with talk of how the administration is in total chaos. Of course, it’s seemed that way ever since Trump took the oath of office.

Over on Capitol Hill, South Carolina GOP Senator Lindsey Graham stopped long enough to talk to Garrett Haake of MSNBC. Graham had this to say initially:

“I appreciate Rex’s service to the country. Pompeo is a great choice. The primary job of the secretary of state is to be able to execute policy and to explain policy to the world in terms of what the president is thinking. Nobody is closer to President Trump than Mike Pompeo. So in that regard, I think he’ll be very effective.”

But then Haake dared to note that Tillerson “had a much more muscular stance on Russia than the president did.” And he followed up with this question for Graham:

“How much of a factor do you think that might have been in this decision?”

“Two top level cabinet [are] officials out in a week.”

The senator began running away from Haake, offering no explanation whatsoever for why he was doing so. As he tried to escape, the reporter queried:

“How much does that concern you about people who are advising the president?”

“I think Pompeo is a good choice.”

But then the senator disappeared behind the door of a Senate meeting room.

There was a time, several months ago, when Senator Graham was harshly critical of Donald Trump. Now, however, he looks like he’s seen a ghost when asked to comment.

What is going on in the corridors of power that we aren’t being allowed to see? And why do these GOP members of our elected Congress refuse to grow a spine?