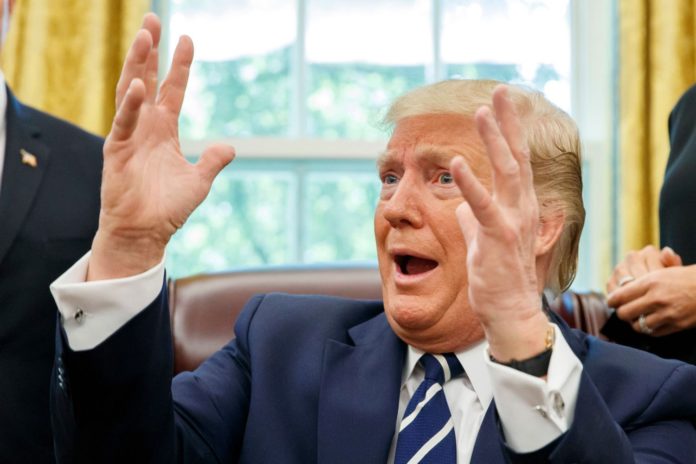 Though he’s been touting his recent compromise deal with Democrats on raising the debt ceiling, President Donald Trump is facing an insurrection from hardliners in his own party who are threatening to sink the legislation when it comes before Congress for a vote, according to Salon:

Trump’s new debt ceiling deal, announced on Monday, puts the nation on track for another $1 trillion deficit this year that should put an end to the 40-year pretense that the GOP is the party of fiscal restraint.

Even though Trump’s budget deal contains higher defense spending and lower levels for domestic and foreign aid programs —generally in line with Republican priorities — conservatives in Congress are still howling.

Since he took office, the national debt has grown by more than 10 percent under Trump, from $20 trillion to $22 trillion.

Senator Ted Cruz (R-TX), who has been a willing cheerleader for Trump, said the new debt ceiling deal “irresponsibly jacks up spending” and “just kicks the can down the road again.”

And Senator John Kennedy (R-LA) suggested he may well vote against the bill:

“I’ve got a lot of questions about this bill. Now some of my colleagues are sold. And it may taste like pumpkin pie. But I’m not near ready to vote for it.”

Mnuchin became chief negotiator of the deal, along with House Speaker Nancy Pelosi, D-Calif., after Trump’s acting chief of staff, onetime South Carolina congressman and House Freedom Caucus founder Mick Mulvaney, was sidelined for blatant hypocrisy. Pelosi and Mnuchin reportedly talked by phone daily for the past week in an effort to secure a deal before Congress leaves for August recess at the end of this week.

I encouraged President Trump yesterday to hold the line in the budget negotiations. Speaker Pelosi’s big government agenda will drive our nation into bankruptcy unless conservatives demand more fiscal responsibility.

Johnson also went on Fox News in an effort to let the president know just how serious he is, telling host Neil Cavuto:

“We are deeply concerned that many of our colleagues have no regard for the debt or the deficit.”

GOP opposition to the debt ceiling deal could even lead to the invoking of a rule only used by Republicans on rare occasions:

With such a large contingent of Republicans already lined up against a deal directly negotiated by a member of Trump’s Cabinet, House GOP leaders are scrambling to decide if they must violate the so-called Hastert Rule. Named for disgraced former speaker Denny Hastert, a convicted felon and admitted child abuser, this is the principle that forbids GOP members from supporting legislation that a majority of Republicans in the chamber oppose. So much for Trump’s art of the deal.

If that happens, Trump could be facing a humiliating defeat and the possibility of spooking the financial markets with a reelection battle coming up next year.