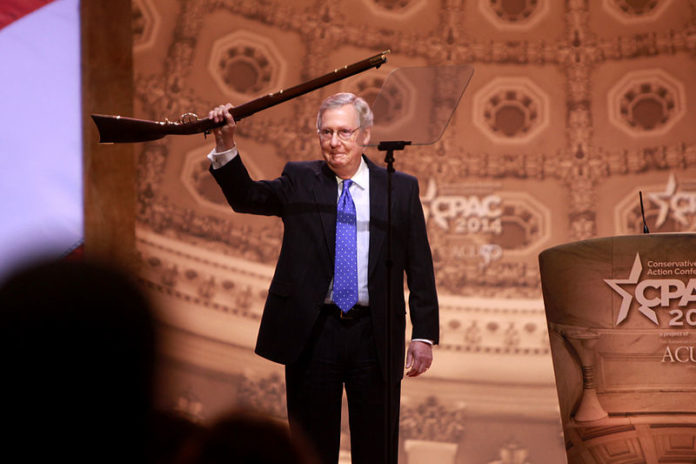 Republicans are about to lose millions of dollars in donations because of their refusal to support gun control.

While the GOP can still count on donations from the National Rifle Association to flow into their piggy banks, they can no longer count on getting checks from Al Hoffman Jr., who had been a major donor over the years, including the 2016 Election, in which he donated $25,000 alone to a group backed by Senator Mitch McConnell (R-Ky.).

But the school shooting in Parkland, Florida and the GOP’s reaction to it has caused Hoffman to shut his checkbook.

Hoffman sent an email to Republican leaders on Saturday announcing that he will no longer contribute donations to candidates who refuse to support an assault weapons ban and other gun control proposals that would reduce gun violence in America.

“If we go from Orlando to Las Vegas, and now Parkland, you just have to know that there are others around the country just dreaming about staging another mass murder.”

In an interview with The New York Times, Hoffman explained his decision to cut financial ties with the GOP.

“For how many years now have we been doing this — having these experiences of terrorism, mass killings — and how many years has it been that nothing’s been done? It’s the end of the road for me. I will not write another check unless they all support a ban on assault weapons. Enough is enough!”

While Republicans could weather losing millions of dollars in contributions from a single donor, Hoffman intends on persuading other donors to join him, which will make things worse for the GOP.

“I’m going to email every single donor I know in the Republican Party and try to get them on board. We’ve really got to start a little movement here.”

And Hoffman is already succeeding on that front as GOP donor Peter S. Rummell has also vowed to not give a single penny to Republicans who don’t support gun control. “It has to start somewhere,” he said.

In 2004, Republicans allowed the 1994 assault weapons ban to expire. In the years since mass shootings have increased and assault weapons like the AR-15 have been the primary gun used by shooters.

In the wake of the Sandy Hook school shooting, Democrats proposed several gun control measures that could have prevented more such killings. But Republicans blocked the measures and have refused to consider them ever since. After every single mass shooting, Republicans send their “thoughts and prayers” and proceed to do nothing to prevent these acts from happening again.

It’s the same script every single time, and that’s because the NRA owns them. But Republicans cannot run campaigns on NRA donations alone. They need other donors, and that’s why Americans who have donated to GOP candidates should join Hoffman by closing their own checkbooks.

Once the price of doing the NRA’s bidding becomes too high for them to bear, Republicans will have to listen to their other donors and obey them if they want money for their campaigns. It’s either that or risk seeing Democrats take over the majority. And then we’ll really see gun control get done.