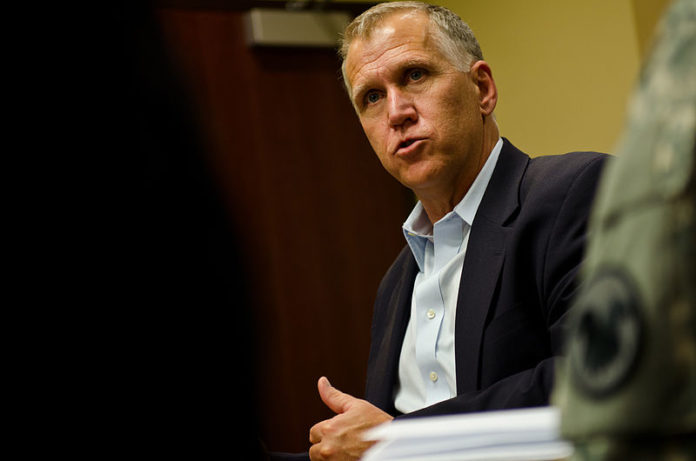 President Donald Trump looks to be headed for a massive defeat once a Democratic bill to terminate his national emergency declaration reaches the Senate after Senator Thom Tillis (R-N.C.) wrote a damning op-ed calling on Republicans to defend the Constitution by voting for it.

Pelosi introduced the bill on Monday and it’s set to be voted on by the full House on Tuesday.

Trump, of course, opposes the resolution and has warned Republicans to vote against it.

But that’s going to be awful risky for Republicans, many of whom previously warned Trump not to declare a national emergency to get his way on his border wall that he demanded Congress fund.

Trump’s action to seize the funding via national emergency declaration is a violation of Congress’ power of the purse enshrined in the Constitution, forcing Tillis to denounce it in an op-ed for the Washington Post on Monday evening.

“From the perspective of the chief executive, I can understand why the president would assert his powers with the emergency declaration to implement his policy agenda,” Tillis began. “In fact, if I were the leader of the Constitution’s Article II branch, I would probably declare an emergency and use all the tools at my disposal as well. But I am not. I am a member of the Senate, and I have grave concerns when our institution looks the other way at the expense of weakening Congress’s power. It is my responsibility to be a steward of the Article I branch, to preserve the separation of powers and to curb the kind of executive overreach that Congress has allowed to fester for the better part of the past century.”

Tillis then pointed out the hypocrisy Republicans are committing by enabling Trump’s executive overreach.

“Conservatives rightfully cried foul when President Barack Obama used executive action to completely bypass Congress,” he continued. “Some prominent Republicans went so far as to proclaim that Obama was acting more like an ’emperor’ or ‘king’ than a president. There is no intellectual honesty in now turning around and arguing that there’s an imaginary asterisk attached to executive overreach — that it’s acceptable for my party but not thy party.”

He then called upon Republicans to vote for the resolution to terminate the national emergency in the interest of preventing future Democratic presidents from declaring national emergencies to push their own agendas in the future, echoing a similar warning from House Speaker Nancy Pelosi (D-Calif.) earlier this month.

“As a U.S. senator, I cannot justify providing the executive with more ways to bypass Congress,” Tillis concluded. “As a conservative, I cannot endorse a precedent that I know future left-wing presidents will exploit to advance radical policies that will erode economic and individual freedoms. These are the reasons I would vote in favor of the resolution disapproving of the president’s national emergency declaration, if and when it comes before the Senate.”

It should be pointed out that while Tillis’ condemnation is appreciated, it appears the only reason he is doing this is that he’s up for re-election in North Carolina in 2020 and knows his chances of winning are weak against his Democratic opponent. Trump’s approval rating in the state is horrendous and his own rating is low as well. One wonders if Tillis would feel the same way about the national emergency if he were not up for re-election.

Still, Tillis is not the only Republican in the Senate who intends to vote for the resolution. Senators Susan Collins (R-Maine) and Lisa Murkowski (R-Alaska) have expressed their support for it and Republican leaders are panicking because they know they may be forced to take a veto override vote if the bill passes and is vetoed by Trump. If the override fails because of Republican opposition, Americans will blame them for failing to stand up to Trump’s imperial presidency, which will be used against them repeatedly by Democrats in 2020.