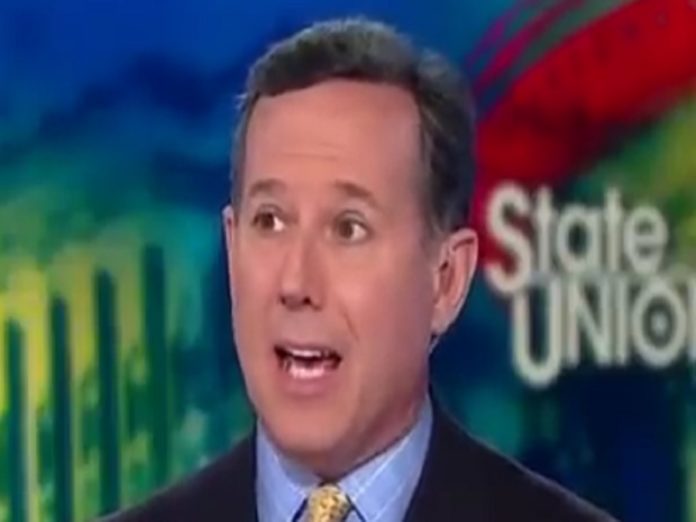 Terminally, former Republican Sen. Rick Santorum was paid quite well by the National Rifle Association during his years in the Senate (he left in 2007). Perhaps it should come as no surprise that he didn’t support Sunday’s March for Our Lives event, which was attended by hundreds of thousands of people across the nation.

And of course, he had words of discouragement for the survivors of the Parkland, Florida school shooting, saying that they should all do something “as individuals,” rather than marching and protesting  er, I mean politicians like Marco Rubio to pass actual gun legislation.

Because after all, if successful gun control legislation had been passed, like it was during President Bill Clinton’s administration, Santorum might not have received $115,942 from the NRA. And Rubio (R-Fla.), might never have received more than $3 million in campaign funding from them, either.

If that legislation had still been active, perhaps young people like Meadow Pollack, Alyssa Alhadeff, Jaime Guttenberg, and Noah Pozner might still be alive today. Indeed, so might the more than 15,000 Americans killed in gun incidents that include 345 mass shootings in just 2017 alone. But at least Santorum and Rubio have fatter bank accounts anyway.

So even though Santorum says he’s “proud of” the young protesters, he thinks they should “learn CPR,” Crooks and Liars reports. While this may seem like it’s satire from The Onion, Santorum said this with a straight face, notes Heather, in her story for Crooks and Liars.

Santorum was talking to CNN’s Brianna Keilar on the program State of The Union when he uttered this foolishness. He was seemingly oblivious to the fact that it had been noted earlier in the segment that state-wide gun laws are ineffective because people can just drag guns over the border from states that have more lenient laws.

But as Media Matters for America notes, Santorum says this about the young activists:

“Yeah, I mean this is the bottom line. Is this a political effort? Is this a political movement? It very well may be, and that’s fine. If the organizers, people who certainly supported it, the Hollywood elites and the liberal billionaires who funded this, it’s all about politics. Is this really all about politics or is it about keeping our schools safe?

Because if it is about keeping our schools safe, then we have to have a much broader discussion than the discussion that’s going on right now. How about kids, instead of looking to someone else to solve their problem, do something about maybe taking CPR classes or trying to deal with situations that, when there is a violent shooter, that you can actually respond to that?”

A slightly incredulous look washed over Keilar’s face at one point, and she pointed out that these young activists aren’t solely looking to others.

“But how are they looking at other people to — I would ask you, they took action.”

But Santorum turned logic on its head.

Because we wouldn’t want Republicans to act responsibly and pass effective gun control legislation now would we?

But phony politicians like Santorum don’t solve these problems either. Not as long as they continue to profit from them.

Here’s the clip from CNN’s State of The Union