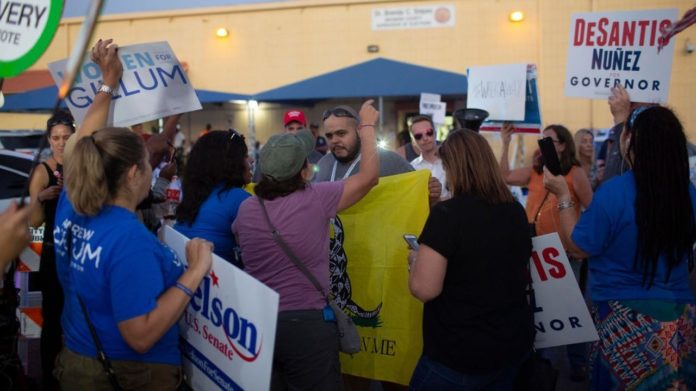 Voters in Florida are still waiting to find out who their next governor and U.S. senator will be, but some right-wingers have traveled to the Sunshine State with two goals: Stop the vote count and declare Republicans to be the victors.

The latest vote counts in the two contested races look like this:

Former Infowars reporter Joe Biggs headed to Florida Friday evening, declaring on Twitter that he was going in order to stop the “radical leftists.”

The Daily Beast reports that a rogues’ gallery of right-wingers have shown up in Broward County or expressed their concern that the local election board would dare to count every vote cast.

Roger Stone, a longtime friend and informal adviser to President Donald Trump, says that while the 2018 Florida election mess may resemble the one from 2000 when George W. Bush and Al Gore were locked in a race to see who would be the next president, there are also differences. In text messages he sent to reporters from the Daily Beast, he wrote:

“The so called Brooks Brothers riot was citizen action to prevent a portion of ballots that had already been re-counted three times being taken by democratic elections board of commissioners to an area with no observers from the republican party or the media in violation of Florida sunshine law.

“The situation in Broward is in no way analogous therefor (sic) claims that I am seeking to foment Some kind of a similar citizen action is false.”

One of the protesters, Janet Klomberg, has served as a poll worker, and steadfastly maintains that ballots were snuck into the Broward County election headquarters overnight, a claim also made by Florida Senator Marco Rubio (R):

This video,posted by an Independent Cong candidate in 18 (who was endorsed by Bernie Sanders in 16) purports to show BrowardCounty ballots being transported from polling places in private cars.

Has anyone in local media looked into this claim or asked elections dept about it? https://t.co/1JztfdRudn

But perhaps the most disturbing possibility of what’s really taking place in Florida is this: Republicans thought they had won, and now want the vote counting to stop ASAP. They seem to have no problem with disenfranchising thousands of Floridians as long as the result is in their favor.

It appears a statewide recount will be done in the days ahead, if only because the two races are so close. State election law mandates a recount. But if indeed that recount hands the election to incumbent Senator Bill Nelson (D) and Democratic gubernatorial candidate Andrew Gillum, will Republicans accept the results or continue to fight the results with prolonged litigation? Hey, it’s Florida; anything could happen and usually does.