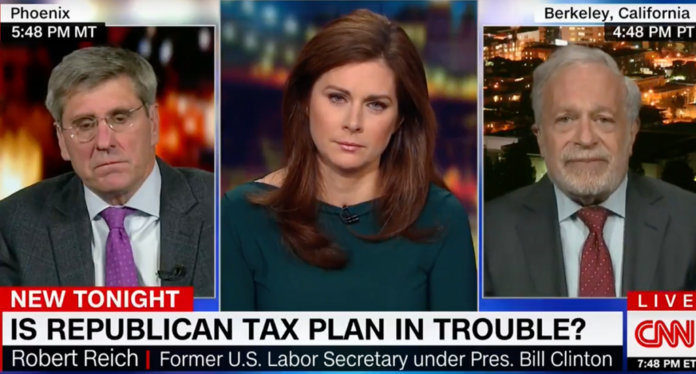 Robert Reich, the former Labor Secretary under President Bill Clinton, is exasperated by the Republican tax plans, and it shows in a new interview on CNN with former Trump economic adviser Stephen Moore.

Robert Reich clearly has had enough, as has most of America. We aren’t stupid enough to buy the lie that corporations and the wealthy will somehow miraculously develop some sense of fairness and egalitarian ideals, distributing the fruits of America’s labor more evenly.

They will almost always hoard and try to gain more power, even trying to take control of the government, as we see very clearly with the Koch brothers, the Mercer family, and now the Trump family. Now our government blatantly works for them, not the average American. The government is supposed to create checks and balances to help “We the People,” and the Oligarchs know it.

Republicans just can’t stop peddling ‘trickle-down economics,’ even after decades of the practice have all-but-destroyed the middle-class in America. Economic Director Gary Cohn reportedly told CNBC, “The whole trickle down … is good for the economy,” adding, “the most excited group out there are big CEOs, about our tax plan.” Ali Velshi, of MSNBC, reported that the Treasury Secretary of the United States had the nerve to call the new GOP tax plans “trick down economics,” as if everybody has just forgotten how utterly failed that approach has been.

Trump’s top economic advisors were caught on tape at a conference of business leaders, and when those leaders were asked twice if they would use the money received by Trump’s tax plan to increase capital investment, hardly anyone raised their hand. Instead, corporations reward the CEOs. Stephen Moore wanted to ignore this and insisted corporations would invest.

“Steve Moore is acting as if we didn’t have an experiment to test this theory. Under the George W. Bush administration, we did have a repatriation tax holiday. What did corporations do with all that exra money? Did they invest it? Did they create more jobs? No!” said Reich. “They just bought back their shares of stock, pumped up share prices, they provided more executive pay to the top executives. This…we’ve done it and we’ve seen there are no results,” he continued.

Trump claims that dropping the corporate tax rate will encourage corporations to bring jobs back from overseas. Host, Erin Burnett, brought up the story of Apple computer, the most valuable company in the United States, as an example. They stash around $250 billion overseas and have moved subsidiaries to an island in the UK because there is a zero tax rate there. Burnett asked Moore what would convince Apple to return to America for a 20% tax rate then?

On November 21, our new documentary "Saving Capitalism" will be coming out on Netflix. We need a system that works for the many, not the few pic.twitter.com/sOvii8pVav

Moore claims Tim Cook, Apple CEO committed to bringing $100 – 150 billion dollars back to the US under Trump’s “repatriation.” Moore then went on to use a debunked Republican talking point, conveniently ignoring that American corporations’ 40 percent tax rate is effectively much lower.

Moore could only respond with a sneering laugh, talking about getting rid of the state and local deduction. That part alone stands to hurt 30 percent of taxpayers, according to an analysis by MSNBC.

Republicans refuse to look at the real problem, and that’s because they aren’t actually concerned with “We the People” anymore. Robert Reich discusses it in his upcoming documentary, “Saving Capitalism,” due out on November 21.

Watch the CNN interview with Robert Reich below: