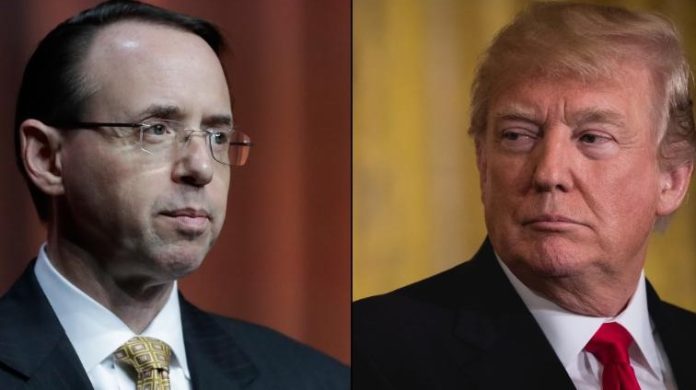 On Thursday, outgoing Deputy Attorney General Rod Rosenstein gave one of his final speeches as a member of the Department of Justice, and his comments certainly sounded like they were squarely aimed at President Donald Trump.

“It is fitting that one of my final speeches in this job is about promoting compliance and preventing corruption.

“Criminal cases reveal illegal schemes to the public and may cost corrupt officials their jobs. But every system remains vulnerable to people who pursue their own personal interests.”

Hmm…sound like anyone we might all know? Maybe a person who didn’t fully remove himself from the family business and is making a mint off his Washington, D.C. hotel as foreign dignitaries and people with pending mergers rent overpriced rooms in an effort to curry favor with the owner?

Rosenstein then went on to add:

“The United States Constitution … aspires to establish a government that promotes the interests of the governed, rather than the interests of their temporary leaders. All government officials take an oath pledging loyalty to the public interest. Reliance on personal integrity and cultural norms is part of the strategy to preserve liberty. But it is supported by structural protections. The enforcement mechanism is crucial, as James Madison recognized in Federalist 51, because ‘you must first enable the government to control the governed; and in the next place oblige it to control itself.'”

One of the “enforcement mechanisms” the Founding Fathers put in place was impeachment, and it certainly sounds like Rosenstein was pointing at that remedy. If so, that’s some expertly placed shade at the sitting president.

The comments from Rosenstein were quickly analyzed on Twitter, and many agreed that the departing Deputy AG was indeed sending a message to Trump. Take a look:

Rosenstein likes to act like he’s all professional and reserved, and then he’ll pull a pin out of grenade and just walk out of the room like this: https://t.co/l3I1Y9G3x1

This is shade in the same spirit of what Mattis said about Trump in his resignation letter.😂 https://t.co/rpDNULbFjB

As reported earlier this year about Rosenstein remaining in the DOJ: “It is fitting that one of my final speeches in this job is about promoting compliance and preventing corruption.” #TrumpRussia https://t.co/uA3eKu2q8p … https://t.co/JuDvwmm0Vb

Rod Rosenstein on his way out the door: pic.twitter.com/HBGbmDCcWY

We’re gonna miss ya, Rod. You’re one of the good guys.