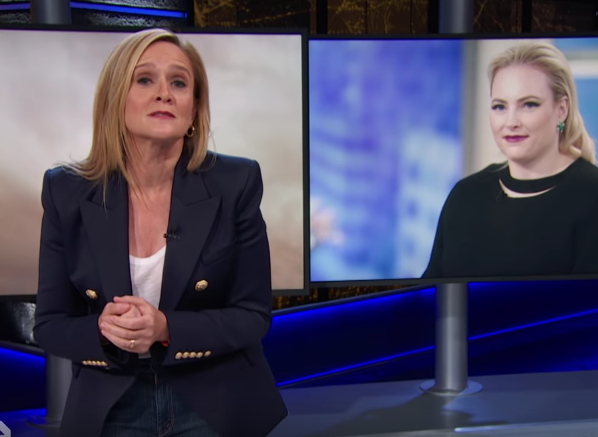 Samantha Bee took Meghan McCain and the media to the woodshed on Wednesday night for barely covering E. Jean Carroll’s detailed rape allegation against President Donald Trump seriously even though she is the 22nd woman to come forward against him.

When former Vice-President Joe Biden merely touched a girl on the shoulders or gave a girl a hug, the media covered it as if Biden committed a crime. But the media has remained pretty quiet about Carroll’s allegation against Trump in which she detailed how he raped her in a dressing room 23 years ago.

Bee, however, refused to let the media ignore the story.

“If you missed this story, that’s not surprising,” Bee said. “Days later, the accusations are being discussed but it’s still being treated as a small story. It’s not getting the wall-to-wall coverage that, say, Fire and Fury did, which is ridiculous, because Trump’s response alone should be headline news for days.”

Indeed, Trump defended himself by claiming that Carroll isn’t his “type,” suggesting that he only rapes women he thinks are attractive enough. Trump’s denial is even less credible because he claimed to have never met Carroll even though there’s a picture of them facing each other.

“Don’t say you have a rape type,” Bee said. “You aren’t her type either, which is the whole f*cking problem. Every woman has heard a guy say some version of ‘you’re not hot enough for me to rape,’ and that is how we know he’s probably a rapist.”

She then took aim at Meghan McCain, who expressed doubt about Carroll’s accusation during a segment on “The View” this week that stunned her co-hosts and the audience.

“Noted TV dum-dum Meghan McCain took a much-needed break from being Judaism’s self-appointed spokesperson to say that maybe Carroll is lying,” Bee said. “Meghan McCain’s take is so bad, Joy Behar literally had to wear sunglasses to hold back her eye lasers. It’s not people who defend accused rapists who put something on the line, it’s the women who decide to speak up who, as Carroll puts it, receive death threats, are driven from their home, dismissed and dragged through the mud, only to see Trump turn it around, deny, threaten and attack them, which is exactly what he did again.”

In the end, Bee dared the media to ask tougher questions and hold Trump accountable instead of asking softball questions, calling out NBC’s Chuck Todd in particularly.

“I’m sorry that the media is tired of talking about how the president did sexual assault a bunch but imagine how tired women are of having a sexual assaulter as president,” she said. “Of course it’s impossible to hear accusation after accusation without getting accustomed to it. That’s no one’s fault and I’m not singling anyone out, but when you let him off with softball questions about where he’s going to build his library without once mentioning his many accusers, you are dropping the ball, Chuck Todd. No one should ever sit down with President Predator without asking about these 22 women.”

“It matters, it will never stop mattering,” she concluded. “You wouldn’t interview Jeffrey Dahmer and only ask him about spice blends. If you’re not going to hold Trump accountable, you are not a journalist. Go do Sunday morning segments about f*cking lasagna. Otherwise, do your job, please.”