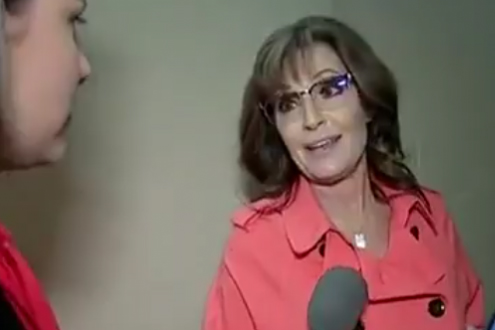 Sarah Palin has weaseled her way back into the news. This time she has something to say about sexual harassment. And also, about guns.

On Thursday, an MSNBC reporter asked the former Alaska Governor is she had ever experienced harassment in the workplace.

Palin responded just as we probably should have expected her to respond. Although I must say, her willful ignorance almost never ceases to amaze me:

The reporter asked, “Have you ever experienced sexual harassment in the workplace as an ambitious woman in public life?”

Right. So what we can deduce from that statement is that Sarah Palin outright expects men to assault and harass women in the workplace. And so, she presumably carries a gun on her person at work. That way, in the event of a colleague trying to expose himself to her Harvey Weinstein style, she…shoots him?

Because boys will be boys, am I right ladies?

There are so many things wrong with Palin’s logic that I don’t even know where to begin.

How about we hold men accountable for sexual harassment and create a safe workplace for everyone, instead of arguing that it’s up to women to appear “threatening” so that these incidents don’t happen?

Palin doesn’t think that’s necessary. She took a moment to acknowledge workplace sexual harassment as a “serious issue”. She also, however, seems a little bit too concerned with the possibility of false accusations.

“And I don’t mean to be light-hearted about it, because it’s a serious issue. It really stinks for women in the workplace that, for too long, men have thought that they can get away with the kind of being that old-school thinking that it’s okay to belittle and harass women, in general.”

“So the floodgates are really open right now that could lead to a lot of false accusations that really harm an innocent person.”

Do you know what’s more important than worrying about men being victims of the backlash against sexual harassment? Believing victims. False accusations are rare. That fact has been proven time and time again.

And media, can we please stop interviewing Sarah Palin?